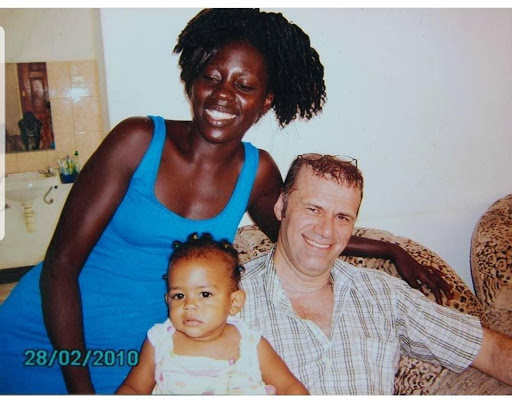 The mother of five reminisced the day she met her mzungu baby daddy, Ojwang's father, and how their relationship didn't end well.

We both made a decision of having you my son, back in 2008, I met your handsome dad, my heartbeat, my coro 🙆‍♂️🙆‍♂️ and my onion 🤣😭🤔🙆‍♂️, at my restaurant in Shanzu THE STOMP 196, we became friends/ lovers and later he invited me to Switzerland, we both agreed to have you [Prince Ojwang]. We looked for you day and night in Switzerland, both of us were happy to have a baby boy, your dad was 48 years old then. When I finally announced that I had missed my periods, your handsome dad took me for dinner and we went into a new life of parenting until hell broke loose,' she wrote in part.

The self-proclaimed president of single mothers tried her luck but the relationship didn't last.

️ when we were 5 months pregnant. I sneaked into Switzerland illegally to try to fight for your space but all was in vain. I was afraid of being deported once they found out I had no proper documents to stick around in Switzerland. I had a Schengen visa, and Switzerland was not Schengen then since then I have taken bullets for you through thick and thin. I have moved homes all over from hell to heaven. I have continuously chopped onions day in day out, I have gone days without food and sleepless nights asking myself several questions, yes love dies or maybe he got bored. it took me time to accept that papa has nothing anymore to do with me. I kept hurting myself by sticking around thinking he would change and have us leave as a family. No, I was wrong, papa was right. Papa loves us, yes but he needed his space, papa was still young and needed to explore life. I understood this very late. So I had to find another dad since life had to continue and that's how we ended up with two fathers Papa & Dad. I love them equally. God protect all my baby daddies who made me a great mom. HAPPY BIRTHDAY ALFONS MARKUS MEYER OJWANG @princeojwang,' she narrated.

Well, below are many times Akothee has ever talked about her mzungu baby daddy after their break up.

I HAVE NEVER ALLOWED MY CHALLENGES TO COVER MY BEAUTIFUL SMILE, NO ONE KNEW I WAS THROWN OUT OF SWITZERLAND 9 MONTHS PREGNANT TO COME BACK TO AFRICA, HIS EXACT WORDS ‘GO BACK TO AFRICA I HAVE NO TIME, ENERGY TO TAKE CARE OF YOU. I AM NOT READY FOR A FAMILY NOW, YOU HAVE TOO MANY CHILDREN, AND A MAN CAN NOT FALL IN LOVE AT 50.’ THESE WORDS PENETRATED DEEP INSIDE MY STOMACH. I SOUGHT ADVICE FROM PEOPLE I KNEW IN EUROPE BUT NONE WAS MAKING SENSE TO ME.

2. When he cheated on her

I WAS STUCK IN NON-EXISTING LOVE, I SO LOVED THE FATHER OF MY SON THAT I DIDN’T EVEN MIND IF HE SLEPT OUTSIDE AND STILL CAME BACK HOME, I CONSOLED MYSELF THAT I AM THE ONE🙄 I WOULD STILL THROW BIRTHDAY PARTIES IN HIS ABSENCE AND CELEBRATE HIS BORN DAY! I WOULD NEVER FORGET HIS BIRTHDAY, AND ALWAYS WATERED HIS MOTHER’S GRAVE WHENEVER I VISITED SWITZERLAND. H WAS THE KIND OF A HUSBAND I BUILT IN MY HEAD, I WAS DATING HIM INSIDE MY HEAD BUT IT WAS NOT THE HAPPENING ON THE GROUND🙊🙊 , I WAS NOT STRONG ENOUGH TO FACE REALITY, I WAS SO WEAK BECAUSE I WAS AFRAID OF THE UNKNOWN, MY HEART REFUSED TO BELIEVE WHAT MY MIND ALREADY KNEW 🤣😂, HE NEVER TOLD ME HE LOVED ME SO OFTEN, AND IF HE DID MAYBE ONCE AND I WOULD HOLD ONTO THIS WORD FOR AGES ALTHOUGH THE ACTIONS WERE OPPOSITE.

3. When he took her to court, seeking full custody of their son (Ojwang) but the mother of five won the case