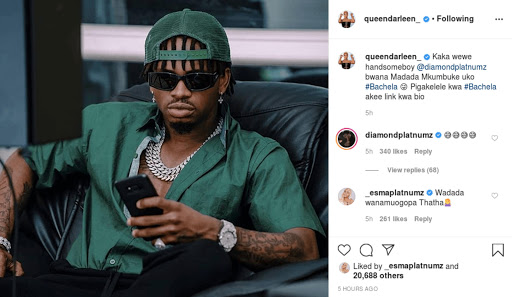 Diamond Platnumz sister Queen Darleen has revealed that he is a bachelor, meaning he's on the market.

The Kijuso hitmaker shared a pic of her brother inviting women to 'try their luck'.

Diamond commented to his sister's post with four smiling faces with open mouth and cold sweat.

Kavokia they don't want him to have kids or a stable relationship coz of wealth. Too blind he can't see. Even Davido his role model has taken all his kids they are with Chioma and him enjoying time together. Diamond instead he is busy sending Lokole, Aristotee and his family to abuse his baby mamas and disrespect them. Let's prepare our Pop corns coz karma am sure is slowly catching up with him

Not so long ago when Diamond was still dating Tanasha, Queen Darleen revealed that his brother wasn't ready to settle down.