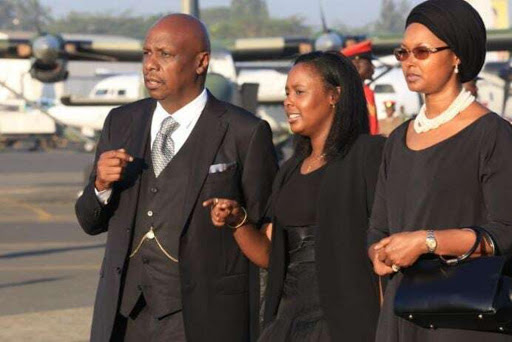 Baringo Senator Gideon Moi said that the reason his late dad asked him to continue living with him is because he was past the age of making babies.

Speaking  while receiving a delegation of leaders drawn from Mt Kenya who had visited him at Kabarak to condole with the family, he said

"One day, about three years ago, he asked me where I was going and I told him I would be going to spend the night at my place which is in Mogotio, about 20 kilometres from here.

He told me not to leave and to instead move in with him and that is why for the last three years I have been living in this house."

"He told me in Kalenjin, 'you are no longer making babies your children are now grown up'.

Until his death, I was with him and just before he breathed his last, it was me he saw," Gideon said.

Gideon said after his father's health deteriorated, he made a habit of having breakfast and dinner at the former President's Kabarak home.

He would then leave to his private home in Mogotio which is about 20 kilometers from Mogotio.

The Moi's are still in mourning after losing their father on February 2020. Moi was Kenya's second president and had served as Kenya's president for 24 years.