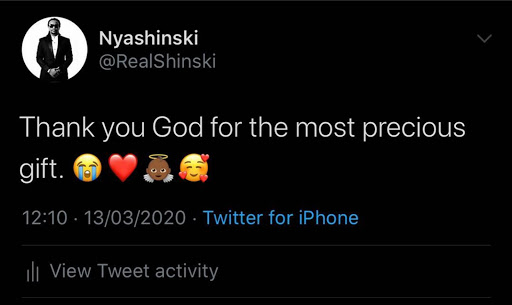 Nyashinski and his Nandi bae, Zipporah ‘Zia’ Bett have delivered their first born child almost a month after the news of the pregnancy leaked.

Taking to his social media, the first time dad wrote

'Thank you God for the most precious gift.'

Zia had not posted anything about her pregnancy on social media.

She was spotted with a baby bump running errands in one of the busy malls in Nairobi.

The couple held their Kotio in November 2019 with Zia almost four months pregnant.

A source who requested anonymity said,

“THE COUPLE LOVES THEIR PRIVACY THAT IS WHY THEY KEPT THE NEWS HUSH HUSH.

THEY ARE EXPECTING THE CHILD MID MARCH LATEST.

NYASHINSKI DID NOT WANT TO HE TROLLED ABOUT BEING UNMARRIED AND HAVING A CHILD OUT OF WEDLOCK.

AFTER ALL HIS PARENTS ARE CHURCH PEOPLE WHO ARE RESPECTED FOR THE POSITIONS THEY HOLD IN THE CHURCH.”