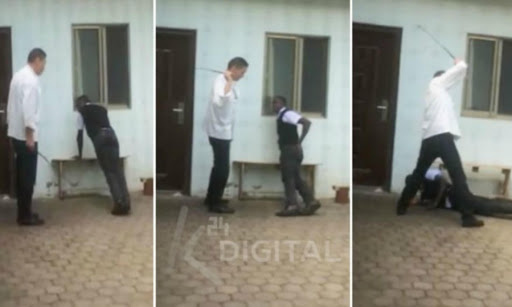 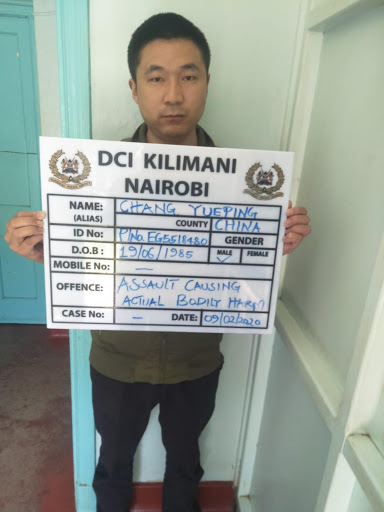 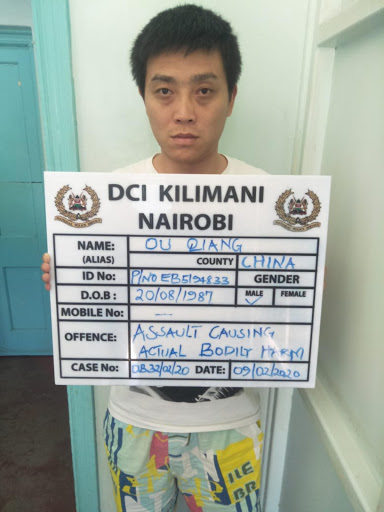 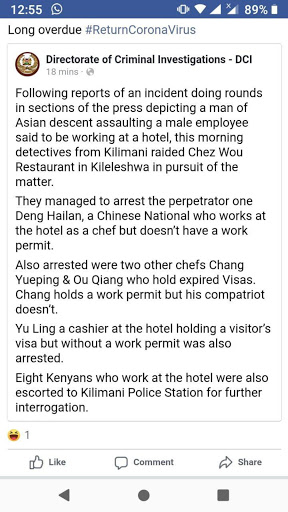 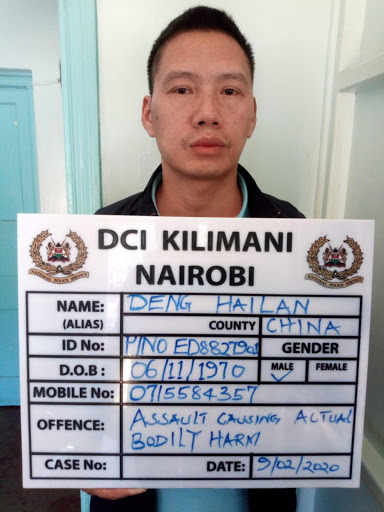 The video which was shared by K24 Digital, shows a Chinese manager believed to be from Chez Wou Restaurant in Kileleshwa canning a waiter and people laughing in the background.

According to K24 digital Simon Oseko Sairo said he was punished for coming to work late and that he endured the brutality and humiliation for over six months.

Simon reported the incident at Kileleshwa Police Station where he was given a P3 form. He no longer works at the restaurant.

The Chinese employees of the restaurant were arrested and some were found they did not have work permits.

Here is a report from DCI.

Kenyans have been angered by the video and reactions include;

Mary John Seriously!!! Why would I allow anyone to lower my dignity like this. We let people step into our territories then complain later, you communicate earlier afadhali wanichukie, but hii madharau Apana. am sure some of His colleagues won't entertain such nonsense

Joyce Shie I feel for the boy child.He had to endure the humiliation coz to get another job is not easy.May the Almighty remember you like He did with Joseph.You shall overcome.

Alex Ndaka This is unacceptable!! Kenya Human Rights Commission Boniface MwangiMwangi. We can't possibly have Kenyans dehumanized to his level in their own land. Action must be taken against these perpetrators!!! But even this guy is a letdown. How can he subject himself to that?

shaz_husseyn This is a lowkey slavery shit.

Eric Mwangi I weep for my country kenya. So much unemployment leading kenyans to be mistreated due to desperation, but the current crop of leadership only thinks how they will share power. I am ashamed of being kenyan.

juliet_amaru What some people have to go through just put something on the table...I'm pissed btw 😥

Deyknow Kafuna That's what I used to see at SGR during construction...I was an electrician bt we used to do any job given.mostly plumbing works...I was frustrated coz of forced overtime with no resting day...I lost weight coz of being overworked until one day I refund work during overtime which mostly ended at 11 pm.kesho yake I was deducted all the time I worked 8 hrs plus the 2 hours ya jioni...I was furious ningepinga mchina nyundo ya kichwa bt wat I decided ni kuwacha job..I hate chinese

Bernice This is slavery in our own country.This is unacceptable

Dan King Get I think next time I have an encounter with a foreigner in Kenya and he displays the slightest form of disrespect, I will go to jail. From my experience, you can not demean me at home, the whole of Kenya, whether I am right or not. Ala!

Mumina Aloye Shibia Yaani other Kenyans are laughing their brothers being beaten!!! President Uhuru Kenyatta pay the China debt we cannot hold on to be caned! We want our peace!

kiarie_judy The fact that a Foreigner feels comfortable doing such in a FOREIGN AFRICAN COUNTRY should tell us exactly how our government fails us. This is not the first case and definitely won't be the last. This is demeaning and repulsive but the since this govt doesn't do shit about it, they are getting bolder and arrogant by the day.

Here are photos of the arrested Chinese workers from the Kilimani based restaurant.