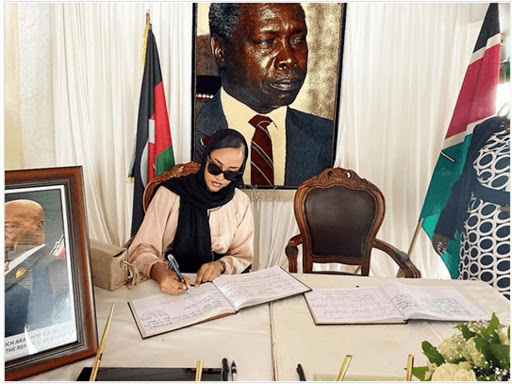 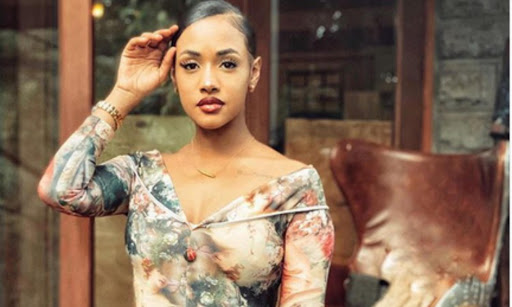 Diamond Platnumz' baby mama Tanasha Donna yesterday joined Kenyans in mourning the passing on of the second president of the Republic of Kenya.

"Condolence books are open at Harambee

Adding, "In addition to other ways of remembering

and honouring the Late Mzee Moi, we encourage each and every Kenyan to plant a tree in his memory or undertake an act of benevolence for the most needy members of our society."

The mother of one visited Moi's Kabarnet Gardens home in Nairobi to condole with his family.

She posted a photo (above) signing the condolence book and captioned it,

As I went to pay my respects to the Late President Moi and his beautiful family. May His Soul R.I.P & our prayers go out to his family during this difficult time. 🙏🏽🇰🇪

This was Donna's first public appearance after her failed EP album launch last Friday, where journalists were denied food and interviews.

Diamond didn't attend the launch and in a post, he shared on social media, he claimed he had an emergency and couldn't make it only to resurface at his sister's birthday party.

The upcoming singer was trolled for her EP launch, which many claimed was terrible and she later responded to critics.

DON’T LET BITTER, JUDGEMENTAL AND UNHAPPY PEOPLE DRAG YOU TO THEIR LEVEL. INSTEAD, USE THEIR BEHAVIOR AS AN EXAMPLE OF HOW NOT TO BEHAVE AND BE GRATEFUL YOU ARE NOTHING LIKE THEM. LEAVE ALL TO GOD. LET HIM DEAL WITH THEM, HE NEVER DISSAPOINTS. 🙏🏽❤️ PS: A HUGE THANK YOU TO EVERYONE WHO SUPPORTED ME YESTERDAY & CONTRIBUTED DURING THE MAKING OF MY EP #DONNATELLA . YOU ALL HAVE NO IDEA HOW MUCH YOU ALL MEAN TO ME. IM GRATEFUL & HAPPY FOR THE AMAZING LOVE & SUPPORT AND MOSTLY GRATEFUL TO GOD,’ she wrote.