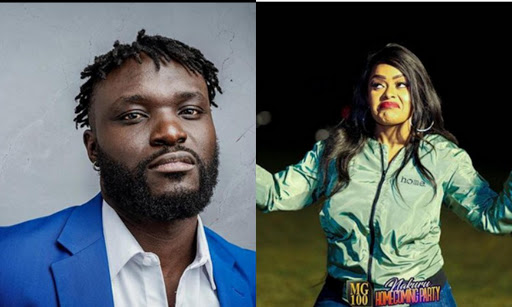 Singer Judith Nyambura aka Avril who has been in the industry for 13 years is not entertaining negativity in 2020.

She has been clapping back at anyone who tries to drag her into any negative vibes.

Talking about their beef during an interview on Milele FM, she said,

He is the one who started the beef.

Naiboi was annoyed that Avril didn't come through for him when he asked her to record a video singing along to his 2 in 1 song.

I had just delivered my baby and I was in recovery mode though no one knew. He sent me a message asking if it was possible for me to do a video and I agreed little did I know he wanted it immediately,' she explained.

He kept sending messages asking for the video yet I hadn't recorded it. I decided to go silent because I had a lot of things going through my mind.

The mother of one also revealed that she had her baby through episiotomy.

I had a problem sitting down and yet Naiboi wanted me to do makeup and shoot the video...I didn't have that time. So when I said I didn't feel like it, it's true.

The beef is still on and while responding to Naiboi's latest post, she said,

I got to a point and was like I won't be picked on every single time. As a female artiste, I take it personally. I need to stand up for at least one or two. [Naiboi] Akwende. Makasiriko ya 2018 wacha.

The singer said people always pick on her and she mentioned that Starehe MP Jaguar did so sometimes back.