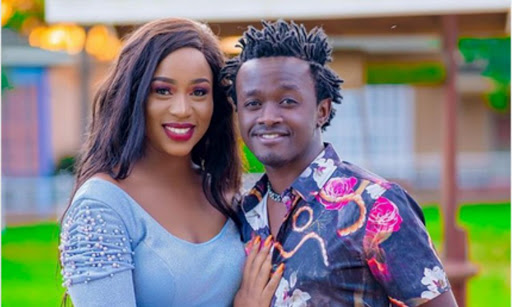 Bahati Reality has been moved from being screened on Wednesday to Monday at 10 pm barely two months after changes in the programming.

The show used to air every Saturday at 7:30 pm but according to sources, it was pushed to after prime news because of low ratings.

On Monday, Bahati shared a snippet video of the show, begging his fans to watch but all didn't go well.

The controversial gospel singer received heavy backlash for being instrumental in having 20-year-old gospel artiste Peter Blessing sent to jail where he spent three cold nights.

Peter was arrested for obtaining Sh2,039,00 and was incarcerated at Cental Police Station.

Check out reactions from Kenyans online

wakks I'm lost for words!when you put someone behind bars claiming 2.1 M what do you mean??? I mean.....aarrrgghhh!!! I thought Jesus is Lord?

Dohcaz Luttah and it will finally get to the dustbin. Am not praying for your downfall but your deeds are leading you there. #Releasepeterblessing and pay him his royalties

Faith Daksha I hope you also recorded the arrest if Peter blessing and Produza Paulo maybe It would be the reason why I can watch. But for now, let me read the comments. Am bored

Jasmine Sanguli Taking advantage of young talent in the name of helping 😏😏😏😏😏 shame on you Bahati shame on you.......we need to know about peter blessing

Waiyaki Cate I will be busy watching nyanya rukia on Maisha Magic East! Ooh sorry I mean I will be on YouTube watching the Wajesus 😏

1chain_muziki We bahati wacha utapeli, you pretend to be helping young stars and you stealing from them why are you doing all that nonsense, stop it!!!@bahatikenya

Qrank Snr This is the kind of program that makes me struggle to change the channel when in the bathroom. Hata sauti ndio mimi hapana taka skia.

Shikoh Luish 20 year contract with 60% going to your account? Ukoloni mambo leo. Ata uarabuni is much better. Contract ni 2 years and it's renewable every year.

Anne Jasmine I thought you are a good guys but your so evil Bahati, you know how to take advantage of young artist in the name of helping them, what you did to peter blessing is unforgivable .shame on you we now know you dark side, I know your taking advantage of Denno too bad he can't talk now

Gladys Jerop This is the show which I'll never watch. I better have my sleep rather than to stay tuned to NTV

Frank Babake Liam This shows the program might be boring to some & entertaining to others; why the change of programming all times?

Irene Sweetney Nabwana I have predicted your downfall, #removebahatirealityshow it is useless

Chebe Release Peter Blessing or we Kenyans we riot...and how come you have been taking 60% off Peter Blessing's hard work...the boy having 10% ...who does that?