Dance with the angels! Photos of Teacher Daisy Mbaluka who was burned to death n Kitui 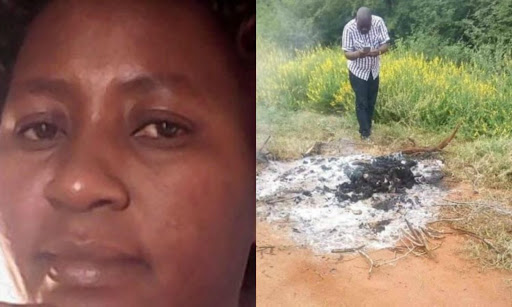 The nation is still in shock following the brutal murder of Daisy Mbaluka Mbithe, a teacher at Ndooni Primary School in Kitui County.

The teacher was hacked and burned to ashes in front of her daughters with an irate mob who were protesting against poor performance by the school in last year's KCPE.

Daisy was attacked while on a motorbike with her two daughters, who were on their way to report to Secondary School for the first term.

In a statement to newsrooms, Ibrahim Mumin, commission secretary said the commission strongly condemns the murder.

The Commission strongly condemns the unfortunate death of the teacher as there are better ways of resolving whatever issue may have contributed to the death of Madam,' he said.

The Commission will not post any teacher to Ndooni Primary School until the security of our teachers is assured.

Kenyans have also condemned the murder and below are reactions

Nicodemus Osoro Madam Daisy Mbithe Mbaluka, fare thee well! Your most cruel, death most foul, most sordid and grotesque murder clearly vindicates and absolves you from any blame for the poor performance of the children you taught as a headteacher.

Ann Gachuki So sad indeed may she RIP

Omwega Evans Sad news of the year..This parents must face full force of the law period

Here are photos of the teacher