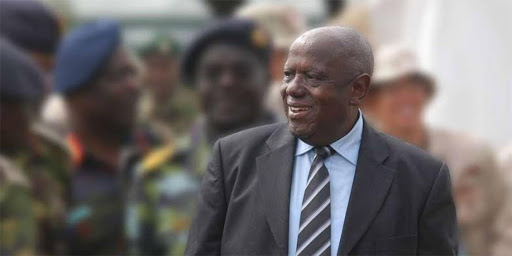 Businessman and politician Njenga Karume died a very wealthy man. Here are some tidbits about his life.

1. Njenga Karume was born in 1929 on Lord Delamare's Soysambu ranch in Elementaita. He was the eldest of 8 children to Joseph Karume (later changed to Karogo) and Teresia Njeri Karogo who were indentured servants working for colonial white settlers.

He had a very strong relationship with his grandfather whom he spent most of his childhood days with.

2. Unfortunately, there were no schools for Africans in Elementaita. Because of that Njenga had to go to school in Ndeiya, Limuru at a school called Kahuho-Karing'a Primary school, at the beginning of 1942.

Keen on pursuing further education, Njenga proceeded to Riara in Kiambu after 3 years at Kahuho, but not before being baptised. Even as Njenga pursued education back in Central Kenya, his parents moved to Elburgon and settled in Marioson Forest in 1944. He later joined them there.

3. Karume's first exposure to business was while he was in school. He began buying and selling books, pencils and other school stationery from a wholesale shop outside the school and resell to his fellow students in school. In his book, he claims to have put the school tuck shop out of business.

4. After his education, Karume managed to get employment doing clerical work on a farm. A few days before beginning work when he attended a rally between the white farm owners and the workers. In the heat of a debate, Njenga managed to ask a question which upset the whites. This saw him lose his job. It is from then on he decided not to be employed.

5. He then started trading in charcoal. He had asked his friend the late John Njenga to join him but he flatly refused, claiming that it is dirty work and he is too educated to do such business. He continued on his own. He then began saving what he earned in the charcoal business to finance his timber business.

6. Njenga operated the Nararashi Distributors, which distributed the products of the Kenya Breweries Limited (KBL). Later Castle Brewing Kenya Limited, a Kenyan subsidiary of South African Breweries (SAB) was formed, with Karume appointed its director. Karume himself sought to distribute the products of both companies, but KBL was afraid of the competition and cancelled the distribution contract with Karume. Karume took the case to the court stating the cancellation of the contract was unfounded. The High Court first ordered KBL to pay KSh 231 million in damages (about US$2.9 million), but upon appeal, the decision was overturned and Karume was told to pay KBL for the suit. As a result, Karume suffered severe financial hurt. He continued to distribute Castle Beer for a while until SAB left Kenya, finally ending his transport business. Karume joined politics in 1974 as a nominated Member of Parliament and in the three subsequent elections held in 1979, 1983 and 1988 Karume vied for and won the Kiambaa constituency seat. Between 1979 and 1988 he served as an assistant minister.

7. Karume was reluctant to join the leading opposition force Forum for the Restoration of Democracy (FORD), foreseeing its split. Instead, he formed the Democratic Party (DP) with Mwai Kibaki and John Keen on 31 December 1991.

At the 1992 elections Karume ran on a DP ticket, but lost his seat to Kamau Icharia of FORD–Asili, whose presidential candidate Kenneth Matiba enjoyed higher popularity in his constituency.

He won the seat also at the 2002 elections. In December 2006, when he was appointed the Minister of Defence. At the 2007 election, he represented the PNU coalition led by President Kibaki but lost the seat to Stanley Munga Githunguri of KANU.

He also married a second wife Margret Njeri Njenga in 1960 upon advice from his father in law that having two wives would help look after his empire.

On 21 February 2006, he married Grace Njoki and the couple had Emmanuel Karume Njenga.

9. In 2009 he released an autobiography titled ‘Beyond Expectations: From Charcoal to Gold’.

10. Before he died he had formed the Njenga Karume Trust which was designed to manage his inheritance. A board of trustees was chosen to manage these interests. He also appointed his wife Grace Njoki Njenga as an overseer over his trust.

Karume had been having medical problems from late November 2011. He had been taken for chemotherapy treatment in India and returned on 1 January 2012 and was undergoing chemotherapy at the Aga Khan Hospital.

He was preparing to go to Israel for further treatment but a few days before leaving he developed an infection. He was admitted to the Karen Hospital on 17 February 2012 in poor health and as the week went on his condition deteriorated.

In the early hours of the morning on 24 February 2012, Njenga Karume was pronounced dead due to a cardiac arrest. He died days after his close friend and political ally John Michuki. Njenga died in February 2012.