From collapsing on stage to visiting parliament in a miniskirt! Times Akothee made headlines 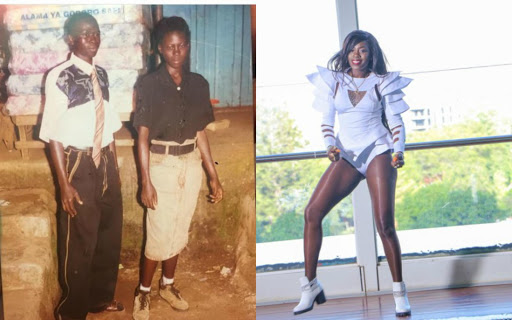 2019 has been a great year for many whereas to some it has been a curse or rather a bad one.

For singer Akothee it has been one filled with both the good and the bad side. The richest Kenyan artiste made headlines for the better part of 2019.

Below are some reasons as to why she was trending on social media.

In March this year, Akothee started a pay bill number calling upon her fans and well-wishers to help her feed starving Kenyans in Turkana county and its environs.

She donated food to the needy and this left the entire nation praising her.

The mother of five went ahead to launch the Akothee Foundation which will help cater for the needy and hunger-stricken communities in the region.

She is known for performing in swimsuits leaving little to the imagination.

From Luo Festival to One Fest Music Festival in Dubai to the US, the Sweet Love hitmaker left tongues wagging because of her choice of on-stage costumes.

Her fashion is not different from the likes of Tiwa Savage, Rihanna, Beyonce just to mention but a few.

To add on that, the singer always pulls several stunts on stage leaving many with their jaws dropping onto the floor.

Akothee understands what her audience wants. But to some, her dressing isn't decent. She has been trolled severally over her dress code, with many claiming she's a role model and needs to act as one.

In September this year, Akothee pocketed Sh1.8 million after performing at a private beach party.

She was contacted by Italian tycoon Bruno Massimo to perform at his 60th birthday party.

This left her the talk of the town, with many envying her tactics.

Akothee banked millions from different shows this year among them Luo Festival. where she performed twice.

This saw Akothee change her dress code to casual and smart meanng for a whole she also stopped posting videos in bikinis on her social media and insulting trolls.

5. Storming parliament dressed in a miniskirt

She was blocked by Parliament security from accessing the 'Members Only' restaurant.  After gaining entry into MPs only area. The richest singer was given a kikoi to cover herself.

She trended for days and while responding as to why she dressed in a miniskirt, she defended herself saying,

I DRESSED MY BEST. THIS IS MY BEST OFFICIAL SO FAR. IT’S ONLY THAT MY LEGS ARE LONGER THAN THE SKIRT,” AKOTHEE SAID.

Two months ago, Akothee's alleged sex tape leaked online igniting mixed reactions. She later came out to deny that she was the one in the steamy video.

KENYANS ARE GIVING ME IDEAS OF RELEASING MY SEX TAPE🤣😂🤣😂 I THOUGHT I DON’T NEED A S4X TAPE SINCE I ALWAYS WALK NAKED SO THERE ARE SOME PARTS OF MY BODY YOU REALLY WANT TO SEE🤣😂. LISTEN, IF ANY OF MY S4X TAPES LEAKS DEFINITELY YOU CAN SEE A WHITE HAND AND A WHITE 🍆 AS OF NOW CALM YOU,' she posted online.

7. When she fainted on stage

The Shengerea Mama hit singer collapsed on stage while performing at the prestigious Luo Night in Kisumu, on December 1.

The incident occurred barely a week after doctors told her she was suffering from fatigue and needed to rest.