'A one night stand left me HIV positive,' Naomi Ireri opens up 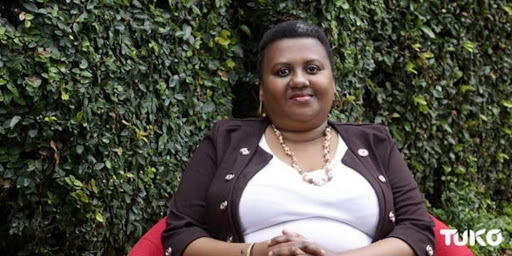 41-year-old Naomi Ireri has opened up on how a one night stand left her HIV positive only for the man involved to walk out on her.

The mother of one was speaking during an interview with a local media.

'I found out I was HIV positive when I was five months pregnant after I went for antenatal clinics.

All along I thought I was OK until I went to a private hospital and they asked for my blood.

They took so long to call me and I started to ask myself why the other were being called in and I was not.

When I went in the doctor asked ' Have you ever been tested for HIV?' To which I responded no . It's then that he told me I was positive.'

Naomi said that when the news of her status were dropped on her she thought it was her baby daddy but it was not.

'I knew it was my baby daddy, who is Nigerian. I called him and asked him if his only intention had been to come and infect me with the disease.'

Immediately I told him that he strongly denied adding that he was not positive but promised to go get tested the next day. I could not sleep that day.'

Her baby daddy got tested by himself and his results turned negative.

'I am at the clinic and I am negative, he gave the counselor the phone and he confirmed that my baby daddy was negative.' Naomi's baby daddy said.

Naomi asked for another test just to be sure.

'I was still adamant so I told him unless we take the test together I would not believe him. We did another test.'

Hoping against hope Naomi went for a test with her baby daddy but like before her results came back positive but he was negative.

'I remembered I had met a guy one year before I met my baby daddy and we became friends, I like him and we had a one night stand.

I just knew him for a week before we slept together.'

Before our date things were turning wrong because he kept me parking for 1 hour, I had a choice to go home but I decided to be a bit patient.

The second alarm bell was that he took me to a shoddy lodging, When we went to the rooms I asked him if he had condoms and he said no.

After the escapade the man gave Naomi some cash and she went home.

'I was scared of being pregnant, he gave me KSH 1000 and we parted ways. When I was going home I kept feeling like something was wrong.

I bought e-pills but if I had known I would have gone to a govt hospital to prevent myself from getting HIV.

After talking to my baby daddy I called my one night stand because after our sex escapade he became evasive.'

Upon being called by Naomi the one night stand went mute.

'When I told him I was positive he just became silent but I told him we needed to get tested the next day.

What made me became 100% sure is because when I called him the next day so that we could meet up for the tests he was mteja.

He refused to pick nor respond to my texts.'

Naomi said that her baby daddy was supportive and he still is despite them not being together.

'I just told my baby daddy about the whole thing. He wasn't upset and he promised to take care of me. I gave birth to my boy and luckily he was negative.

My son's father is still negative but he moved on and he still supports the baby.'