'I threw a stone at them,' Arrow Bwoy narrates how he separated his parents from fighting 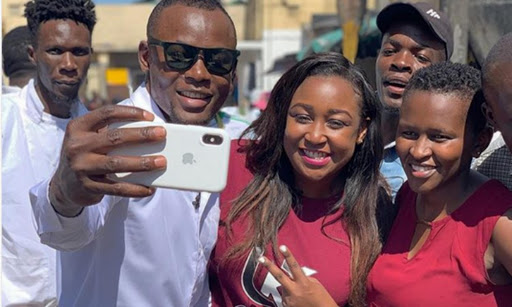 Multitalented local artiste Arrow Bwoy is among the many people who grew up in a domestic violent home. The Digi Digi hitmaker revealed this during an interview on Upclose with Betty.

Arrow Bwoy, whose real name is Ali Yusuf is from a polygamous family and his father had 24 children. Arrow Bwoy had two siblings and the other 21 were from different mothers. His mother is of Ugandan descent and father Luhya from Kenya.

My mum and dad used to physically fight, a lot!', he told Betty Kyallo.

Their fights were so bad, that other pupils in school would ridicule me, saying: ‘Look, your father beats up your mother every day,' he said.

Of course, living in such an environment affected my education and well-being.

One day Arrow Bwoy intervened in his parents' fight and all didn't go well. Narrating the experience, he said,

I had just arrived home from school when I saw mum and dad fighting each other out in the open. I got so angry, but I did not have the physical strength to separate them. You know what I did? I picked up a very large stone, and when they had created a fairly big gap between them, I threw the stone in the space between them. The stone smashed against a wall, and they immediately stopped fighting. They, thereafter, looked at me, with each of them accusing me of wanting to hit him or her.

Cases of wife battering have been on the rise of late and he advised couples to solve their issues maturely instead of resorting to violence.

Marital problems or relationship wrangles cannot be solved through physical fights, never. I urge couples to sit down and amicably solve their differences without resorting to violence