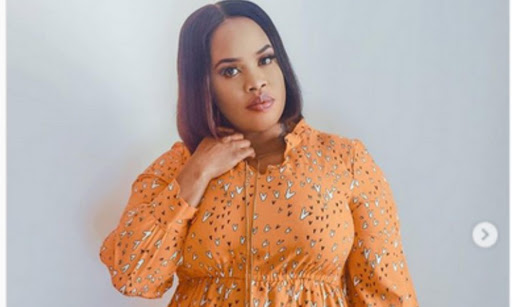 In a candid interview with at her place along Kirichwa road, Bridget said she and her mother were very tight and she described her as a great person.

My mum had a good heart and was very patient with people.

Bridget's mother passed away in March this year and while remembering the fateful day, she said,

'The morning before she died I sent her photos of my son Sekani because she had insisted I send her. that was the last message and I'VE never deleted it,' she said.

She called after I sent the pics and told me 'you have to be patient with people and don't expect so much from them'. Also don't stop being nice to people.

She said losing her mother at the time her career had just picked up was painful.

I wish God gave her more days to live. She really wanted to see her grandchildren. I looked for a baby for five years. I tried getting one with my first boyfriend but it didn't work.

I tried with my second boyfriend, a Nigerian but it didn't work. My third boyfriend, a Ghanian left me because I couldn't give him a baby. Finally it worked with my baby daddy, Sekani's father.

She revealed how she was introduced to her Nigerian baby daddy with her friend barely a week after breaking up with the Ghanian man.

She told me there's this guy who has traveled all the way from Malaysia and he really likes you. I fell in love with him the first time I saw him,' she explained.

After partying together we started dating and the rest is history. Before I knew it I was pregnant and it didn't matter if he wanted a child or not. When I got pregnant he was okay with it but after three months he told me to abort the baby. He told me he would give me any amount to get rid of the pregnancy but because I had been through a lot I couldn't.

She concluded by saying,

I don't regret having a baby, it's been a great journey as a mother.

Below is the exclusive interview with Mpasho.