'Njenga Mswahili and I were together on Sunday, days before he died!'- Consumator 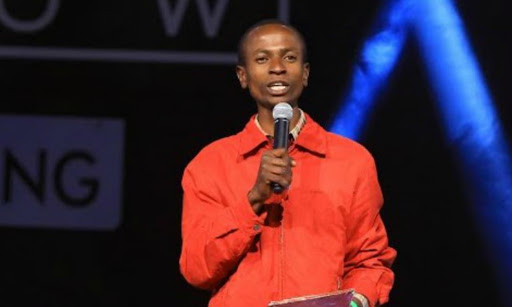 Popular comedian Consumator has been hit hard by the death of his close friend, colleague and church-mate Njenga Mswahili.

Njenga was found dead on a rail track in Dagoretti. Speaking in an interview with Mpasho on Tuesday, Consumator said he met the comedian in 2008.

"We met at a Churchill Show recording, and he introduced me to his church. I got the opportunity to perform in church thanks to him. His death is a big blow."

Njenga, who was battling addiction, was in and out of rehab and was depressed. Consumator denied rumours the comic had turned into a preacher before his death.

"We were trying to help him recover after rehab and I was planning on working on new projects together. I even planned to secure him a job to keep him busy because when he's idle, it used to affect him," he said.

"We were together on Sunday, a few days before he died, and he seemed okay. We even planned to meet the following week but unfortunately, he died."

The deceased was not consistent in appearing on Churchill Show in the last three years. Consumator described him as a kind and humble person.

"He was a very creative man and God-fearing. He used to pray for us before we started the show," he said.

Consumator said the only way depressed people can be helped is by reaching out to them daily.

Don't succumb to societal pressure to live a flashy lifestyle just because you're famous. Live your life and work hard. One day, things will change. Be you," he said.

Othuol Othuol, who met Njenga in 2010, described him as a gentle soul. Speaking to , he said,

He was one of the best comedians back then and was a mentor to most of us who were still upcoming comedians.

He admitted that depression is real, especially among struggling celebrities.

Most celebrities go through depression and Njenga's case is just one of the many because not everyone speaks out. His death came at a very bad time,' he said.

Being on TV yet you have nothing is really depressing," he said.

The godfather of Kenyan comedy Daniel Ndmbuki eulogised the talented comedian in a touching post he shared on social media.

"It’s with great sadness. We grieve the death of Njenga Mswahili. May God’s will be done!" he wrote.

Njenga will be buried on Thursday November 14, at Lang'ata Cemetery.