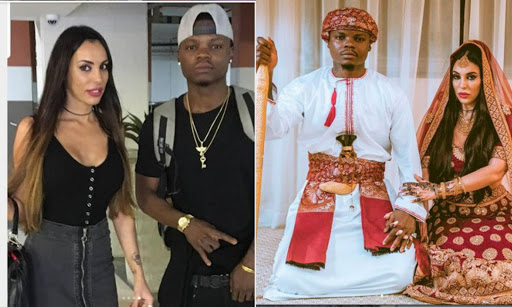 Tanzanian superstar Harmonize is ready to be a father.

The Uno hitmaker while wishing his caucasian girlfriend Sarah a happy birthday, said he was now ready to start a family.

The controversial caucasian lady is madly in love with the Tanzanian crooner and responded to his post with a sweet message, which read;

Thanks my love ❤️❤️❤️ my husband I love you more and more 😍😍❤️I wish this love it will be forever for all our life❤️.

Harmonize left Diamond Platnumz' WCB record label a few months ago and in an interview with Clouds FM's XXL Show, he said he is not on good terms with his once upon a time BFF (Diamond).

It is no longer a secret that I am not in good terms with WCB management. I wouldn’t want to lie that all is well.

My contract with WCB stipulated that I pay them Tsh500 million to be allowed to leave the company if my 15-year agreement with them hasn’t ended. That money, the contract said, would allow me to own the copyrights to my name and music produced under the Wasafi outfit.

Harmonize said that it wasn't easy raising the cash and he opted to sell some of his properties.

I did not have the money, when I decided to leave WCB [in August this year], and therefore, I had to sell my three houses, several possessions to raise the needed Tsh500 million. As I am speaking to you, what I owe them is very little.