'She smashed the head of Kori's wife with pressure cooker!' Taxi driver narrates 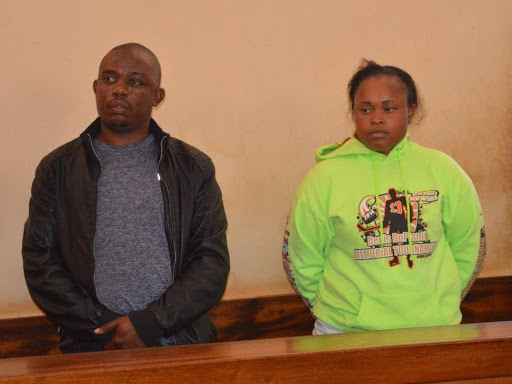 Relying on sworn court documents, we can now describe in detail the gut-wrenching murder of Mary Kamagara and the lengths to which Judy Muigai went to cover it up, trying to deflect the blame and roping in an acquaintance to help her.

The documents paint a picture of a middle-class couple — Joseph and Mary —whose mutual trust and fidelity were stretched to the limit. Something had to give.

The statement recorded with police and filed in court by Michael Mathenge, the co-accused in the murder of the 40-year-old mother of two, lays the blame for the premeditated killing at the feet of Judy Mungai.

He describes Mungai's desperate efforts to clean up the murder scene and cover her tracks.

Then she called Maghenge to help her clean up, wrap the body in beddings and a carpet and dispose of it.

Mathenge, 36, says that he first met Mungai last year as a customer in his car hiring business.

On that day, Mungai, who was Kori's ex-mistress, called Mathenge to hire a V8 or Prado to run her errands. This was not available so he sent her a white Toyota Allion Sedan.

After a busy day, Mathenge narrates, Mungai called him at about midnight, saying she could not drive the hired car out of Homeland Restaurant where, according to the statement, she had spent the whole day with Mary Kamangara.

Mathenge said  Mungai ordered him to go see her at Four Ways Estate, where she was living.

In a black Voxy car, he arrived at the estate, Daisy Court, after 1am, finding a restless Mungai alone in the parking lot and holding a sisal bag.

Mungai then went to her house and then left with Mathenge for Homeland Restaurant. At the restaurant, Mathenge claims, Mungai

"..in full glare of my vehicle's headlights...

walked to a vegetation fence and picked a Mercedes-Benz's ignition keys and opened the vehicle".

She called me to the car and told me that the Mercedes-Benz [white, number KCC 068U indicated to have belonged to Kamangara] had no fuel and she had no money, thus she wanted cash Sh500..."

Mungai then said she had left the ignition keys of the hired car at her house, requiring them to drive back to collect it.

At her house, she parked the Mercedes-Benz's across her door with the car's left door open and lights on.

"She then instructed me to follow her to her house, located on the third floor...she ushered me in and closed the door," he writes.

Mathenge added that upon entering the house Munga told her of how she had met up with Mary Kamangara and killed her.

"Thinking that she was calling to give me the keys of the hired car.

she told me she had another story [narrating to me] how she met with her husband's other wife at Homeland Hotel and compelled her that she takes her to her house to check some documents," He wrote.

On arrival at (Mungai's) house, Mathenge claimed Mungai told him, a fight broke out when Kamangara saw her husband's photographs hanging on the wall."

"Judy told me how she hit the woman with a pressure cooker and [she] fell on the carpet floor bleeding and instantly died as a result of the excess bleeding," he wrote. This happened at about 7pm.

Mungai then cleaned the body, wrapped it with a blanket and bedsheets and kept it in the kitchen, he said.

She also cleaned the floor.