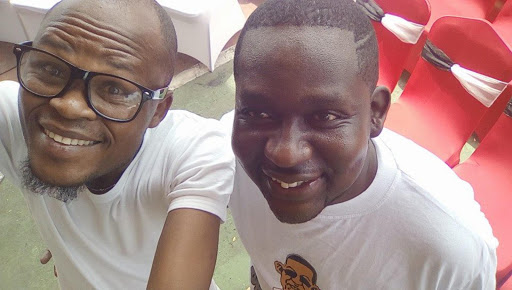 Comedian Ben Maurice Onyango, popularly known as Othuol Othuol, has thanked Kenya's godfather of comedy Churchill for helping him in his hour of need.

The comedian-cum-actor was diagnosed with TB in February this year, and in an interview with Word Is on Monday, he narrated how he was bailed out.

I finished my medication late September and I'm still recovering. I thank Churchill for paying my hospital bill," he said.

Jalang'o and Luolikali group also helped me pay my rent for the months I hadn't paid.

Othuol Othuol said many friends deserted him after he became sick.

I lost many friends. Very few came through for me," he said.

Comedian Karis took me to hospital when I had no one to help me. He used to take me to hospital every day for treatment. Japheth Oduk was also there for me.

Talking about working with Churchill and advice to fellow comedians, he said,

He's a good person. If you see the soup is too hot, don't drink because you're the one who will suffer.

The comedian, who also acts in local production 'Auntie Boss' as a security guard at Taifa Estate, attributes his success to comedians Kajairo, Pengle and Jalang'o.

Jalang'o has been supportive of my comedy journey and he paid for my first temporary passport to Uganda back in 2010," he said.

Othuol Othuol performed at a show hosted by Gaetano Kagwa, and he performed alongside UK comedian Kevin J.

The actor was very close to the late Ayeiya. "I really miss Ayeiya. He was a great friend," said an emotional Othuol.

He admitted he was once an alcoholic but is now a recovered addict.

Being alcoholic affects one in so many ways. I lost friends, respect and jobs," he said.

It's almost two years now since he quit alcohol and he hopes to get a job on radio.

Please, Patrick Quarcoo, give me a job in your company," Othuol said, hoping his wish will be granted.