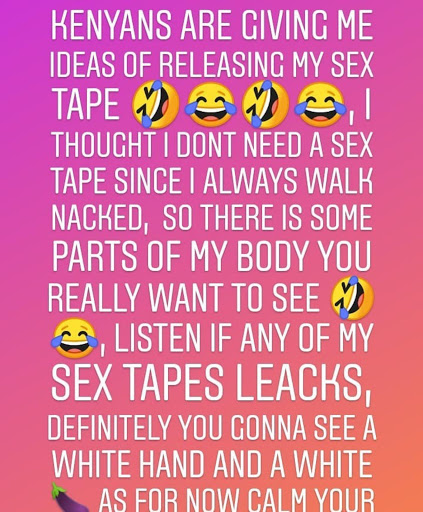 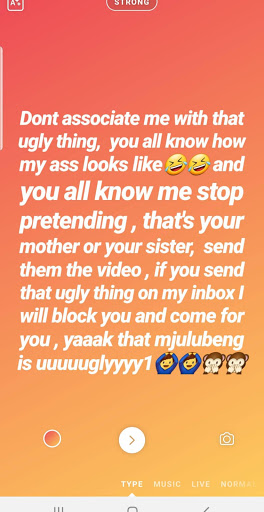 Singer Akothee has dispelled rumour going on that her sex tape has leaked.

The self-proclaimed president of single mothers has told off those spreading rumors asking them to get their facts right before claiming she's the one in the video that has gone viral.

She said that incase she was to release a sex tape the d**k of the other participant would be white.

Taking to social media she wrote,

Kenyans are giving me ideas of releasing my sex tape🤣😂🤣😂 I thought I don’t need a s4x tape since I always walk naked so there are some parts of my body you really want to see🤣😂. Listen, if any of my s4x tapes leaks definitely you can see a white hand and a white 🍆 as of now calm you.

She went ahead to tell people to stop associating her with the video.

1. Stop running away from reality, and sending rubbish in my inbox. The s4x tape making rounds is not mine.

2. That a*s is far away from my 1 kg although it looks very beautiful especially with the stretchmarks 😍

3. The blue bedsheet looks like some guest room, in some I don't know which area. Come on, you all know my standards bitches!

6. If you are sure the tape is mine, why don't you post it online so everyone has access 🤔, why is it doing rounds in inboxes, then coming on comments?  malaya nyinyi.

7. As for the women commenting rubbish, sorry I am not a lesbian, I love sex, so you won't catch me in your bed.

8. As for the men sending the same, you can wank with that video, and have Akothee's song in the background, forget having her in real life in your bed, but keep dreaming 🤣😂😂.

9. I don't do silver bangles or necklace, madam boss does pure gold, so I don't know where your broke brain is taking you too, chieth. GET A LIFE AND ACCEPT MY SUCCESS.