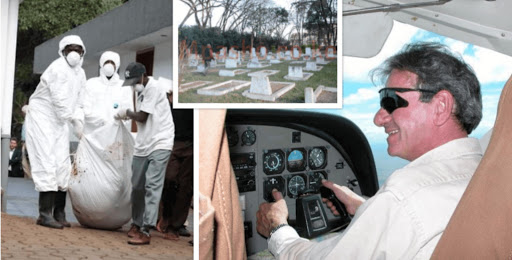 The burial of Tob Cohen which was to happen today has been postponed until tomorrow. The private ceremony was to be held at the Jewish cemetery in Nairobi.

According to our sources, the burial was postponed because they lack a quorum of priests who are to undertake the burial rights.

For a Jewish burial to proceed they need at least 10 priests.

Gabrielle Van Straten, Cohen's sister was to attend the burial but will not do so despite having been at the forefront of the funeral arrangements.

Gabrielle flew out of the country on Saturday just a day after her late brother’s will was opened.

Before his death, Cohen had expressed his desire to be given a Jewish send-off, despite having lived in Kenya for more than 30 years.

The body of Tob Cohen was found in a septic tank at his Kitisuru home on 13th September, after disappearing on July 19, 2019.

The body of billionaire Tob Cohen must be ritually cleansed, covered and prepared for burial according to Jewish tradition decreed in the Torah.

“TORAH IS THE LAW OF GOD AS REVEALED TO MOSES AND RECORDED IN THE FIRST FIVE BOOKS OF THE HEBREW SCRIPTURES (THE PENTATEUCH).

IN THE PENTATEUCH WE ALSO SEE GOD’S RESPONSE TO SIN, HIS RELATIONSHIP WITH MANKIND, AND GAIN KEEN INSIGHT INTO THE CHARACTER AND NATURE OF GOD,” A CLOSE RELATIVE TO THE FAMILY TOLD THE STAR.