'I want to be served by my wife Diana not you!' Bahati chases househelp 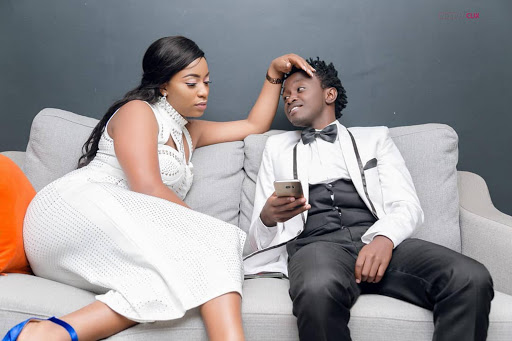 Singer Bahati is among the men who prefer to be served with their wives and not househelps.

In Saturday's Bahati Reality show, the Mama hitmaker wasn't happy when he came home and his househelp, Irene, served him dinner.

I want to be served by my wife and not you,' an angry Bahati told her.

Diana was busy breastfeeding their newborn child and couldn't serve her husband.

The father of three after being served ate barely a quarter of the food and left for the bedroom. He was met with his angry wife trying to soothe the baby to sleep.

Kwanini Irene ananiserve chakula ukiwa hapa. Ni wewe nimeoa ama ni Irene? Why would Irene serve me when you're around? Did I marry you or her?' the singer asked his wife.

irene can hold the baby! We hired her to help even with the kids.

The couple then started arguing on who was to babysit at night. Bahati tried to evade his duties saying he was tired.

His wife wasn't convinced and she went ahead to tell him to babysit.

Are you serious? Do you know how tiresome it is taking care of a small kid? I rarely sleep. Leo ujajua hujui. You'll babysit till morning.