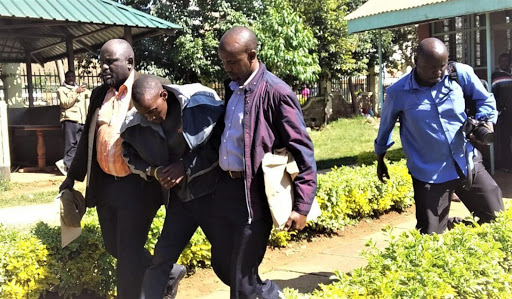 An Eldoret court has directed that a suspect linked to the murder of a police officer Ribina Moraa be taken for medical examination at the Moi Teaching and Referral Hospital, MTRH.

The frail-looking Ogachi was not even able to stand at the dock on his own and had to be supported by security officers when he was brought to court.

The Nairobi-based businessman was arrested in connection with the murder of a female police officer Robinah Moraa who was based at Naiberi police station in Uasin Gishu.

He was arrested by detectives in Nakuru on Friday while seeking treatment at the Rift Valley Provincial general hospital, Nakuru after swallowing some poison in an attempt to end his life.

Moraa who is suspected to have been murdered by her estranged lover was found lying in a pool of blood in her rented house in Annex area on Thursday last week.

Sitati directed that the suspect be arraigned in court tomorrow (Tuesday), September 17 after undergoing treatment.