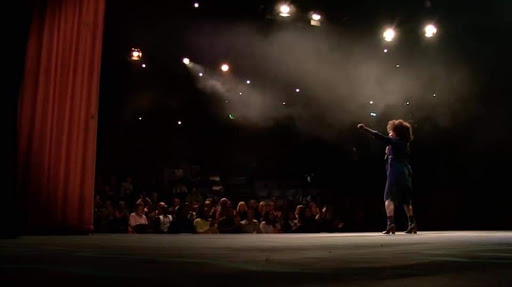 UK based comedian Njambi McGrath has come out to defend herself after her stint on Churchill Live was aired and it was a train wreck.

Njambi took to her official social media pages to explain to her fans what happened.

She said, "Ok! People keep messaging me to ask about my appearing on the #Churchillshow, and since they aired it unedited prompting many people to message me, here is my version."

Read her narration below.

He sought me out having watched my videos online and flew me to Kenya to perform and I was very honoured to perform in my home city of Nairobi.

I was told that there would be 6 African comics doing the #LaughFestival and I was happy to join my African brothers and sisters.

They said they would pay for my fee, accommodation and flights.

I was asked to go see the comedy tent the day before which I did and was instructed on the night of the show to arrive at 7pm for a prompt start.

Sure enough I arrived and people were all arriving around 3,000, I was told. There was no one to meet me and since I didn’t know my way round I got lost and took ages to find the green room.

This was shocking because there is not a single person able to sit and drink alcohol for several hours and still concentrate.

By midnight I was dying of hunger and thirst but still no one offered me anything to eat or drink.

Frustrated I went to Churchill and asked him upfront when I was going on stage because I was getting very tired and hungry and he replied soon. I went back, sat and waited.

At 1 am, I was assured I would be next so waited by the stage door but was pushed out of the way to make way for African drummers who spent half an hour drumming presumably to wake the exhausted people up.

By half one I was now quite angry!

Churchill went on stage and did 20 minutes of singing nursery rhymes which seemed to liven the audience, I guess drunk people enjoy a sing-a-long.

No one had offered me a drink of water or even a snack. Still. But I know things are tough in Kenya!

But surely a drink of water.

It was almost 2 am when I was brought on stage and Churchill asked everyone to stand up and give me a standing ovation (puzzling and awkward) but fair enough, I have never had 3,000 people stand up for me so it was great!

I felt like the queen. I looked across and I could see my relatives were asleep and I was quite envious of them.

On stage I did 2 minutes and it was like interrupting people in a bar to tell them jokes about slave trade.

It was very noisy and extremely chaotic. I asked the audience if they wanted me to carry on and the rowdy drunks yelled no!

The feeling was mutual!

The worst thing was how MC Jesse felt he could disrespect me by performing a lurid dance with me in front of my mother and daughters pushing himself on me.

Back stage a bizarre looking man came to me and told me he was a journalist and that he was sorry by the low standards of the show and that he would like to interview me.

I told him I was too exhausted but none the less the asked for selfies and video asked me to say 'Wanyonez or something' to which someone said was very rude.

Unsurprisingly, he wrote an article which I haven't read yet as I haven't had a chance but some fans have already tagged me on it.

This is not how you run a comedy show. I love Kenya, Kenyans! Stay well. And yes they refused to pay for my accommodation and shortchanged my fee!