I loved her as a drunk mess: Proof that Bahati hearts wife, Diana Marua! 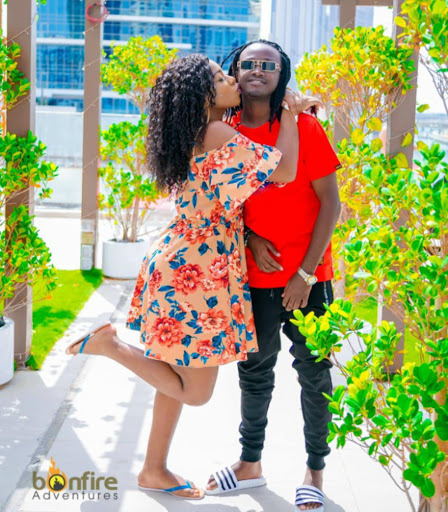 Bahati knew his wife, Diana Marua was not saved or conform to his beliefs but he still fell head over heels for her.

"WE MET WHEN HE WANTED TO SHOOT HIS MAPENZI VIDEO A FEW YEARS AGO. HE WANTED A VIDEO VIXEN AND THAT’S HOW WE MET," Diana revealed.

At the time, Diana had just found out that the man she was dating was a cheater.

‘I caught him pants down, literally,’ Diana said.

Adding, "MY HEART WAS TORN APART ON THE MORNING WE WERE GOING TO SHOOT BAHATI’S MAPENZI VIDEO. I FOUND MY EX-BOYFRIEND (MY LOVER DURING THAT TIME) CHEATING ON ME. I COULDN’T BELIEVE MY EYES."

Anyhow, that meant she was now single and free to mingle. Bahati was ready for all the shenanigans that came with dating a party girl.

THERE’S A TIME EVEN WHEN WE WERE DATING I PICKED HER UP FROM A CLUB ALONG NGONG ROAD. SHE WAS DRUNK AND PRETENDED TO HAVE SEEN ME YET I COULD TELL SHE DIDN’T. I EVEN ASKED HER IF SHE WAS OKAY AND SHE SAID SHE WAS, YET CHEWING GUM TO DO AWAY WITH THE SMELL," Bahati said.

Now the mother of four children, Mama Majesty details how her weekendsas a party girl were like.

I NEVER USED TO GO TO CHURCH. MY LIFE USED TO START FROM THURSDAY TO MONDAY. TULIKUWA TUNATOA HANGOVER MONDAY. THE WHOLE WEEKEND WAS ROAD TRIPS.

Even with her fast life, Bahati did not give up on Diana.

THERE’S A DAY BAHATI TOLD ME ‘THERE IS A PLACE I’M GOING AND WHEN I COME BACK I’LL LET YOU KNOW’. WHEN HE CAME BACK, HE DISCLOSED TO ME THAT HE HAD GONE TO PRAY [FOR A WIFE] AT THE MOUNTAIN.