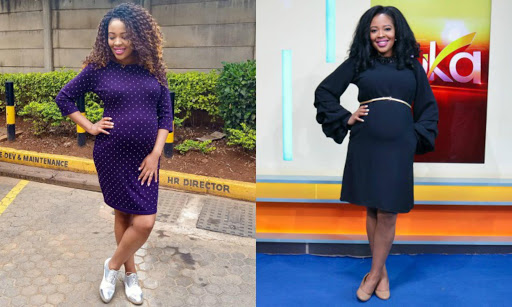 Citizen TV's presenter and gospel singer Kambua Mathu is thankful to God for the safe delivery of her son, Nathaniel Muhoro Mathu. She was mocked for not giving birth after being in a marriage for 7years.

I HAVE BEEN CYBER-BULLIED FOR NOT HAVING CHILDREN. IT TAKES JUST ONE PERSON TO START THE CONVERSATION. I COULD TWEET ABOUT ANYTHING, LET’S SAY: ‘IT IS SUCH A BEAUTIFUL DAY’,  AND SOMEBODY WOULD REPLY WITH: ‘UTAZAA LINI?’' Kambua said during a past interview.

Her story has been compared to that of Hannah in the bible, who stayed childless for several years before God blessed her with a baby boy Samuel. In 1 Samuel 1:10-11, Hannah's prayer to God reads,

In her deep anguish Hannah prayed to the Lord, weeping bitterly. And she made a vow, saying, “Lord Almighty, if you will only look on your servant’s misery and remember me, and not forget your servant but give her a son, then I will give him to the Lord for all the days of his life, and no razor will ever be used on his head… So in the course of time Hannah became pregnant and gave birth to a son. She named him Samuel, saying, “Because I asked the Lord for him.

Well, below are things you should know about Jackson Mathu and Kambua's child.

Nathaniel is a baby name e meaning Gift of God; God has given in Hebrew language. Nathaniel was a friend Philip (one of the Twelve Apostles of Jesus).

John 1: 49; Nathanael then immediately recognized Jesus as the Christ, calling him the “Son of God” and the “King of Israel.

3. His birth was announced by his mother's colleague

No one had an idea that Kambua had given birth until Holy Dave said it live on air.

Kambua and her hubby Mathu recently celebrated their seventh year marriage anniversary. It came with a special gift, their son Nathaniel.

Seven is a significant figure and in the Old Testament the world was created in six days and God rested on the seventh.

In the New Testament, the number seven symbolizes the unity of the four corners of the Earth with the Holy Trinity.

5. Named after his grandfather

He is the first and only child of businessman-cum-pastor Jackson Mathu.

8. His parents are very private

Both the gospel artiste and her husband prefer a private life from the public limelight. They are very secretive.

Nathaniel's mother is a brand ambassador for various brands among them beauty and hair products.