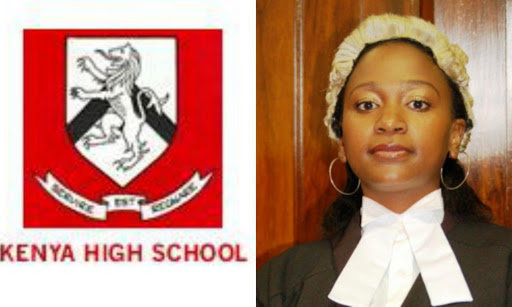 Former TV girl and lawyer Esther Arunga was at the peak of her career when she quit her job to start a new life with hubby Quincy Timberlake.

Arunga was a true definition of beauty and brains and inspired many girls back then. In 2010 Arunga got married to Quincy and they left for Australia, where all hasn't been rosy.

Quincy and Esther will be charged for the murder of their three-year-old son on Thursday. Social media is filled with messages of Kenyans Sympahathizing with Eather Arunga.

Arunga's former schoolmates at Kenya High (Bomarians) have rallied behind her and been sending positive messages her way hoping for the best.

One Jean Ayacko, shared a post reminiscing her shool days with Arunga. She wrote.

Calling on all Ex Bomarians and my friends to help me stand in the gap for Esther Arunga. I was in Form 1 when Esther was in Form 4. She was very smart. An “A” student. Not just that, she was fun, eloquent just living her life like any high school student. I used to look at Esther and her friends and wonder if one day I would ever be like her or speak like her or be graceful yet hyper like her. She was all rounded. There is this song we used to sing in Kenya High if your house or class or just the school had won some trophy or award. The song went: “Aloya! Aloya tumeshinda! Aloya.” I remember Esther dancing to this song. Running with her classmates around the blocks and classrooms. Her class had won some trophy. I don’t remember what. She was dancing hard just like all her classmates.

See, Esther was smart as in book smart. I remember her mentioned every Friday at the merit awards. We had weekly quizzes in Kenya High throughout the term and if you scored highest in class you were mentioned at the Merit awards at Friday Assembly. This was conducted by the principle class by class. Esther was always mentioned. She was very smart.

She was all rounded, smart yet also a great dancer and participated in extracurricular activities. Esther was not those form 4s that you forgot about. I don’t remember her being a prefect either (was she really a blue rag guys, I don’t remember that?) maybe she was but I don’t remember that authority prefects had because she was too cool, too sociable, too nice and just pro students. Like anybody else I think I once saw her and some friends doing some punishment. Probably noise-making😆 Like I said she was the girl next door or was it student next door? Just a normal person yet very brilliant, beautiful inside and outside.

Today I am here to tell you guys that Esther is not just that news anchor that you all saw on TV neither was she just Timberlake’s wife or whatever you remember from the media. She is a PERSON. She is me and you. She is somebody’s child. She made a mistake. Everybody makes a mistake.

I am calling on all Bomarians current and former, I am calling on my friends, my Facebook family and my prayer warriors to stand in the gap for Esther. That whatever it is she is going through, may God meet her at her point of need. May she feel God’s love. May we smother her with LOVE.'

The post attracted hundreds of Bomarians who showed support to their own.

Check out some of their messages;

Sarah Akwabi You said it Jean, Esther was and I believe still is such a lovely soul, may God see her through this dark phase

Irene Midamba Thank you Jean Ayacko. Esther is my first cousin and she has been through a lot. Thank you for calling upon all to stand in the gap. It has been a tough watching it all unfold 😢😢

Rister Blessed Mum I am right here behind you Jean. I remember Esther Arunga. She used to be a blue rag. She came to fellowship every Saturday. Our God is a God of second chances. We all make mistakes but His love and amazing grace always cover us. I will do a live Facebook show for prayers for Esther Arunga, Rose Muhando and Congestina Achieng. Whatever the enemy has stolen from these powerful past influencers,may the Lord restore in Jesus name!

Akinyi Awuor Amen, as an ex-bomerian and a mother (i can’t even imagine what she is going through having lost her child in such horrible circumstances), my prayers are with her. It shall be well with her

Georgie K Mbugua That’s so kind of you. How I pray she bounces back.

Nyaudo Nya Koguong I remember when still a fresher and she was already in KSL doing her diploma and part time presenting news in some studio, can't remember well. I would see her more often (I was in JKUAT, Karen campus, first year)... I envied her a lot and promised to emulate her. She was kind of those to figure you wanna be but can't fit in well because you are simply not her.

Till today I still cry 😭 for what happened. When she started going down, my light started fading. I still can't believe...destiny belongs to God indeed and there's nothing impossible with God. May God of Shadrach, Meshack and Abednego stand strong for her.

Flora Terah Igoki There is hope, let's wait for Thursday, if they convict her, we can all sign a petition to the President to have her transfer to Kenya under Transfer of Prisons Act 2015, then once in Kenya she can be given parole. Esther was and is still sick, she needs medical attention, not prison. Esther suffered as people watched. When she moved from one church to another seeking to ease the pain, people took advantage of her.

Her Nyceness Genevieve I’m always saddened by her ordeal and the swift turn of her life’s events - too painful to watch. In solidarity, we stand in the gap for Esther Arunga.