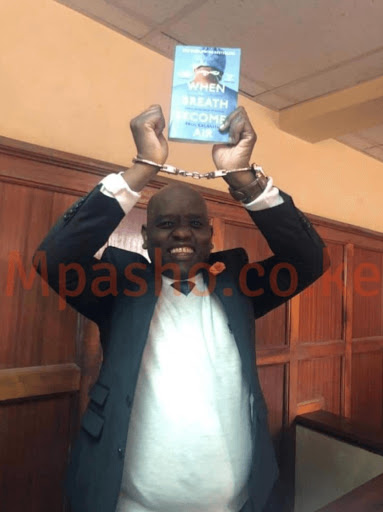 Weird as it may sound, Dennis Itumbi's stay in the cells was not so horrendous.

The State House head of digital narrated how he met an inmate high on drugs threatening to "kill the government".

Itumbi narrates how he slept on the floor and shared meals with other detainees.

The conversation starter in the cells is always - Umeshikwa Kwa nini?

For most of those arrested the response is usually a denial.

I shared the 2×2 foot cell with three other guys.

We slept on the concrete floor, each occupying a stretching space.

We used the vest as our pillows or the upper part of the hand.

Itumbi goes on to narrate how a cellmate of his smoked weed only for them to discover it was dried eucalyptus leaves.

I will come to that. Enter a guy who I will call Jose.

He takes the empty 3rd cell. He is dressed in white Denim shorts, that he later tells us is his boxers.

For two hours he speaks to none of us.

Eventually, we invite him to share a meal as was tradition during the lock up time.

During the meal, the question is asked of him, " Kwanini ulishikwa?"

As if on Cue. Jose rises and starts hitting the cell walls.

" I will kill the Government," He shouts as the blows on the wall continue.

At this point we had no access to newspapers or books. Time was punctuated by such moments.

Shocked at the confession Itumbi and his cellmates asked how Jose intended to kill the government and the answer is hilarious.

How do you kill Government? a colleague asks.

" Kwanini wanakataa Bangi? Why are they frustrating Jah economy? That is why Kenya is a third World Economy, you cannot fight Jah herbs and talents."

We urge him to finish eating first.

Man shall not leave by bread alone but by every herb created by Jah.

I have a kid and wife, they rely on me and my smoke, Bangi smoke is a blessing.

The Cells door is banged. A signal that it is time for the Deputy OCS Assembly.

In the assembly, Jose is asked were you smoking Bangi?

We all burst into laughter even the police in attendance.

Jose left the cells before me, reason; it was discovered he was actually not smoking bangi but dried up eucalyptus leaves that had been mildly burnt and rolled into a paper.

In his own words,

Who decided trees are trees and not doors? Get high on your own terms, create your reality man!" In essence who said Eucalyptus leaves is bhangi?

He is a free man. Just spoke to him before clicking post on this update.