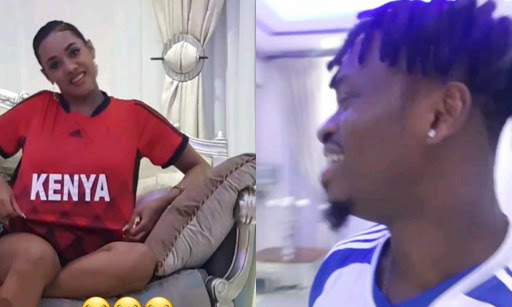 Diamond Platnumz is sad after his team Taifa Stars was defeated by Kenya's Harambee Stars.

It was billed as the most entertaining match so far at the ongoing AFCON competition. Kenya trounced Tanzania 3-2.

Fans of both teams praised their sides and were convinced that their favorite teams would perform well.

In one of the videos, Eric kidnapped Tanasha, warning Diamond and his team Taifa Stars.

The Tanzanian crooner later responded to Eric's message, saying he had sent his army to rescue his bae Tanasha, who's rumoured to be pregnant.

After the match, KOT trolled their neighbours Tanzania and Diamond wasn't spared.

The Kanyanga hitmaker accepted defeat but he said that he would revenge. He also highlighted that he is lonely seeing as Tanasha has been held hostage elsewhere.

Today I see my house as a prison. But there's no problem, I know how I'm going to revenge.