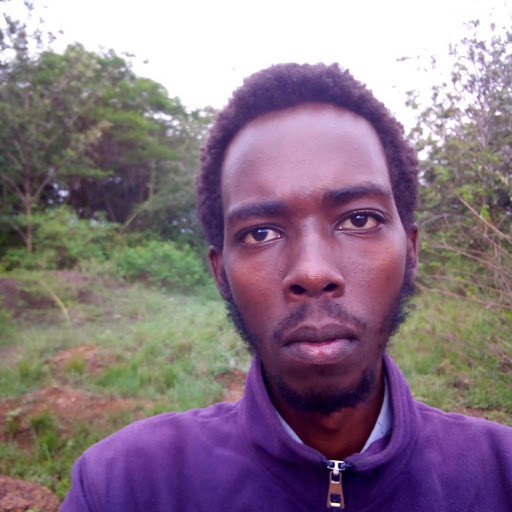 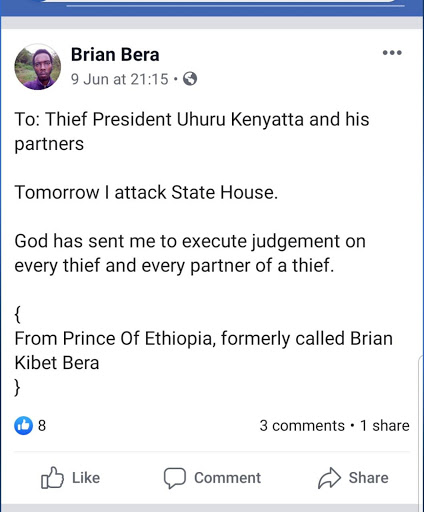 A young man identified as Brian Bera on Facebook has been shot as he tried to access State House, Nairobi.

According to reports, the man was armed with a knife.

Brian had posted on Facebook that he was going to attack the house on the hill.

The police report filed at Kileleshwa Police Station under OB 38 of 10/06/2019 at 1810hrs. It was reported by C.I Wanja A GSU officer attached to State House.

"Today at around 1605hrs one male adult trespassed into State House by climbing over "Gate Bravo" and upon being challenged by officers manning the said gate he drew out a knife which prompted officers to fire at him where he sustained a gunshot wound on the left shoulder plate.

Scene visited by Stapol Kileleshwa and DCI Kilimani and upon searching the suspect a national ID card no. 31955909 bearing the name of Brian Kibet Bera aged 25 yrs old, a student ID card no. En291-0432/2013 from JKUAT university.

Interrogation carried out shows suspect is a fifth-year student at JKUAT pursuing Bachelor of Science in Mechanical Engineering. Also recovered was the said knife he had earlier brandished. The suspect has been booked at Kileleshwa police."

In his post, he referred to President Uhuru Kenyatta as a 'thief', claiming God had sent him to carry out the attack.

To: Thief President Uhuru Kenyatta and his partners

God has sent me to execute judgment on every thief and every partner of a thief.

In a post he shared on June 9, he wrote;

It is a spiritual war.

The devil has no power to kill me. He may only torture me.

I will not allow myself to be captured because I will be tortured with drugs.

Remember Samson was never killed by Philistines. Only torture.

I am dropping out of school. Schooling is torture and spiritually satanic. It drives me away from God.

Another post he shared on the same day read;

You have persecuted me from my childhood, from my mother's womb up to now.

I tell you Lumeek, British, Luos, Kisiis, Kikuyus and other foreigners, leave my land.

Tell President Uhuru Kenyatta and his master the Bankers this:

Brian goes ahead to quote a Bible verse Deuteronomy 20:8 - And the officers shall speak further to the people, and say, 'What man is there that is fearful and fainthearted? Let him go back to his house, lest the heart of his fellows melt as his heart.'