'I would like to meet Jacque Maribe's parents,' - Monicah Kimani's dad 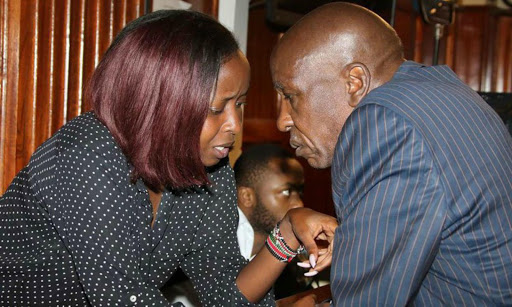 Jacque Maribe's BFF Dennis Itumbi has told all about his conversation with the dad of murdered Monicah Kimani.

Paul Ngarama is reported to have sat next to Itumbi in a plane when they had an intimate conversation.

Mr Ngarama was among the first people who found out that his daughter had been brutally murdered in her apartment. Her neck had been slit ear to ear and she had been dumped in the bath tab.

Her hands were bound together an indication she was tortured, according to investigating detectives.

Maribe and her ex-fiance Joseph 'Jowie' Irungu were charged for her murder. The case is ongoing.

Itumbi spoke to Nation and revealed that Ngarama would like to meet Maribe's parents.

Ngarama said, "If you see Maribe’s Mum and Dad, tell them that one day when it is all over we can pray together as parents, maybe we are the people God wants to use to reach to our young people.”

Itumbi in the same interview added that the bereaved father was particularly impressed by the way he showed unwavering support to Maribe for the month she was in prison.

Itumbi was quick to defend himself saying that apart from their unplanned plane encounter, he hasn't met Monicah's dad again.

“I have not met him because I do not want to be accused of interfering with witnesses,” Itumbi explained.