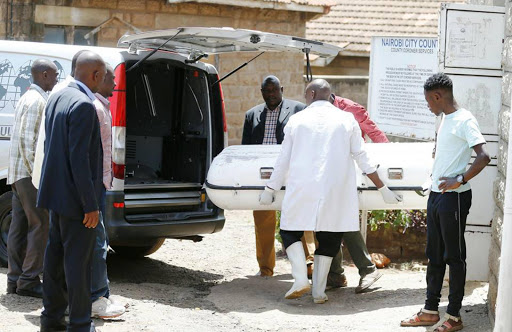 Mildred Odira may have been killed elsewhere and her body dumped near GSU roundabout at Alsops along Thika Road.

The postmortem conducted yesterday showed she had severe injuries on the torso.

It left two-centimetre hole in her forehead.

Mildred, 32, was a switchboard operator with Foresight Company based at Nation Centre in Nairobi.

Her internal organs were destroyed. There were no injuries to show she was involved in an accident.

Oduor did not address reporters but briefed the family on the results of the postmortem.

It looks like she was hit with a hammer and laid on the road to make it appear like she had an accident.

The investigators also took samples for probe into the possibility of rape. Millie said;

They have taken nail samples to probe whether she put up a fight against her attackers.

Mildred's body was found at City Mortuary after she had gone missing since Tuesday last week.

The body was yesterday moved to the Lee Funeral Home.

She left her house in Kariobangi South for treatment at about 4am. The family says she was diabetic and had hypertension.

Police picked her body by the roadside and took it to the mortuary a few hours later.

Davies Ochieng’, a taxi driver who is the main suspect, was on Monday remanded until February 14.

Police sought more time for investigations into his role in Mildred’s death.

The family said Mildred was murdered and that she was not involved in an accident as earlier claimed.

Her brother Carrington Ogweno claimed there were threats to his life over the investigations.

He told reporters that two men followed him to his house on a motorbike and warned him against pursuing his sister’s case or he would "end up like her."

Ogweno reported the matter at Tassia police station under OB number 02/05/2/2019. He said he was not afraid of death.

“I'm not moved. If Mildred case will take me down then let them come and kill me but the truth will stand,” Ogweno said.