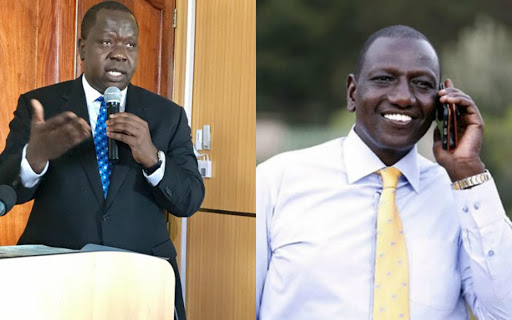 The two have been engaged in serious fighting, which has been kept out of the public eye for months, and those aware of it yesterday told the Star that the battle is spiralling out of control.

According to multiple sources, the fights have involved multi-billion-shilling tenders being pushed by Ruto and his associates, which Matiang'i has refused to approve.

The DP's spokesman, David Mugonyi, when contacted yesterday evening for a response about the tender row, responded furiously,"That's nonsense."

Matiang'i is known to be very close to President Uhuru Kenyatta and has his own presidential ambitions.

The latest incident occurred this week when the DP is reported to have asked the Interior CS to award a tender for the supply of police uniforms to other people, not just the National Youth Service.

Matiang'i stood his ground, insisting yesterday that all uniforms will be made by the NYS, as directed by President Kenyatta.

Without naming names, an angry Matiang'i told off a "politician" who wanted a share in the supply of the multi-million tender to supply fabric for the new blue police uniforms. He was speaking at the Kenya Institute of Curriculum Development after a meeting with MPs and the boda boda task force.

"The Inspector General of Police, the PS and myself have been under pressure by some quarters, and all manner of thieves, that we should import police uniforms.

The Standard yesterday reported that police have not been able to get their new uniforms because the fabric is unavailable.

But Matiang'i dismissed the claims, insisting that the government has already paid NYS Rivertext and companies in the Export Processing zones to make the uniforms.

“Sasa wewe na wakora wako mahali mlikubaliana mtanunua uniform mtaenda muwaambie na muwaeleze kwamba hatutanunua uniform kutoka kwingine," Matiang'i said. This loosely translates to "You and your crooks, wherever you agreed that you will import police uniforms, go back and tell them that we are not importing."

Ruto and Matiang'i were also engaged in a cold war when the President visited Kisumu last week.

Intelligence sources told the Star yesterday that a governor from Nyanza, known to work with Ruto, ferried people from different parts of Nyanza to where President Kenyatta

"Their brief was to heckle Matiang'i because of the boda boda crackdown but Matiang'i avoided the rally and only showed up at the Kisumu State Lodge in the evening.

On Monday Ruto, while speaking in Kakamega, opposed the boda boda crackdown, saying operators are businessmen and should be treated as such.

Ruto and Matiang'i also clashed in February this year after over a multi-billion-shilling tender to supply arms.

The police department had floated a Sh3 billion restricted tender for the weapons. Inspector General of Police Joseph Boinett then drafted a letter recommending that a tender be awarded to a company in Eastern Europe. A government official aware of the incident said;

The DP then asked Matiang'i why he was sitting on the tender papers but Matiang'i said he was waiting for the minutes, which never came.

It is also understood that sometime this year the DP asked Matiang'i to approve a deal in which some "investors" wanted to develop prison land. The prison is located in Rift Valley on a huge piece of land.

"The CS asked the DP to arrange for Cabinet approval before he could authorise the investment. The DP was upset and the transaction collapsed," another source familiar with the duelling said.

One of the most dramatic clashes between the two took place in September 2016 when Matiang'i was then Education Minister.

Ruto then asked Matiang'i to appoint Kosgey but Matiang'i refused, insisting that Ayiro was the most qualified to take over the leadership of the university. A source in the Office of the President said;

The CS then wrote a letter instructing himself to appoint Kosgey and wanted the DP to sign it. Ruto took the letter and tore it up.