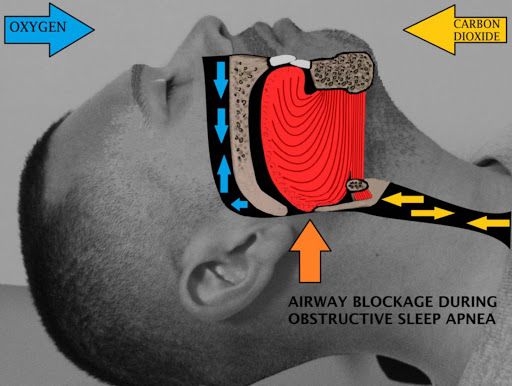 Loud snoring could be an early warning sign for dementia and memory problems, scientists say.

People with obstructive sleep apnoea, which often causes heavy snoring, did worse in memory tests and have changes in the brain linked to dementia, a study found.

At least half a million Britons suffer from the condition, which is common in middle-aged overweight men and causes the walls of the throat to narrow during sleep, stopping breathing.

Scientists from Sydney University now suggest this could shrink parts of the brain by reducing oxygen levels in the blood.

The study found those with sleep apnoea had reduced thickness in their left and right temporal lobes, which are memory centres of the brain and linked to dementia.

These brain changes were linked with poor performance in a memory test where people were given a 15-item list and asked to recall it after 20 minutes.

Professor Sharon Naismith, who led the study from the Brain and Mind Centre at Sydney University, said: ‘Our results suggest that we should be screening for obstructive sleep apnoea (OSA) in older people.’

She added: ‘We should also be asking older patients attending sleep clinics about their memory and thinking skills and carrying out tests where necessary.

‘There is no cure for dementia so early intervention is key. On the other hand, we do have an effective treatment for OSA.

'This research shows that diagnosing and treating OSA could be an opportunity to prevent cognitive decline before it’s too late.’

The Australian researchers recruited 83 people over 50 who were concerned about memory problems to a sleep clinic.

Participants slept normally while airflow through their nose and blood oxygen levels were recorded.

Graded on an index for sleep apnoea, 63 of the 83 had a mild to severe form of the condition.

The results, published in the European Respiratory Journal, show those with low levels of oxygen in their blood had reduced grey matter in their temporal lobes.

This loss of brain volume has been linked to the devastating memory loss in dementia patients.

And, while the study did not look at dementia, it found that people whose brain changes showed up in MRI scans performed worse over five memory trials using lists of 15 items.

Professor Naismith said: ‘Between 30 and 50 per cent of the risk for dementia is due to modifiable factors, such as depression, high blood pressure, obesity and smoking.

‘In recent years, researchers have recognised that various sleep disturbances are also risk factors for dementia.’

Sleep apnoea can be treated using a continuous positive airway pressure device, which prevents the airway closing during sleep.