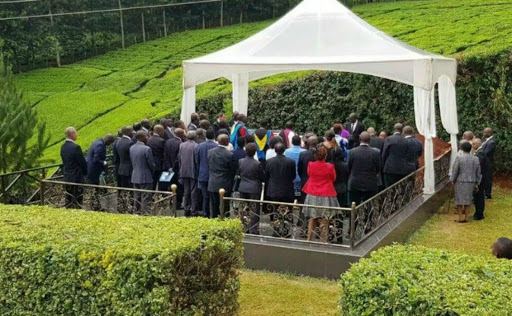 The rich kid succumbed to injuries at the Karen Hospital where he was rushed to after he was involved in a grisly road accident along the Southern Bypass.

John Macharia, who sired a child with media personality Lisa Amenya but parted ways, were co-parenting and his burial ceremony was a private affair.

According to our close sources, the funeral was said to have been low key with only a few people  invited to the burial ceremony.

"Only top management are in the know about the burial arrangements."

Mourners who attended the burial were restricted from taking photos and sharing information on social media but managed to get a pic.

Above is a photo of mourners gathered around Macharia's body before he was buried.