'I am desperately sad, but I will endeavor to not go mad with grief,' mourns comedian whose son died from brain tumor 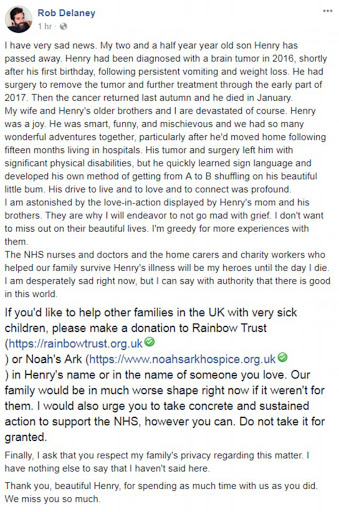 American comedian Rob Delaney has revealed that his two-year-old son Henry has died from cancer.

The Catastrophe star, who now lives in London, revealed the devastating news in a  post on Friday, in which he paid tribute to his 'smart, funny, and mischievous' child.

'Henry was a joy,' wrote Delaney. 'He was smart, funny, and mischievous and we had so many wonderful adventures together, particularly after he'd moved home following fifteen months living in hospitals.'

In his message, Delaney, 41, explained that Henry was diagnosed nearly 15 months ago after suffering persistent vomiting and weight loss just after his first birthday.

The toddler underwent surgery to remove a tumor followed by further treatment throughout last year, spending 15 months in hospital. Sadly the cancer returned in the autumn and Henry died last month.

Delaney explained that while brain surgery left his son with 'significant physical disabilities' he found his own ways to overcome them.

'He quickly learned sign language and developed his own method of getting from A to B shuffling on his beautiful little bum,' said Delaney.

'His drive to live and to love and to connect was profound.'

Delaney paid tribute to the NHS in an emotional Facebook post, saying that the nurses and doctors who work for the serive 'will be my heroes until the day I die'.

He added: 'I am desperately sad right now, but I can say with authority that there is good in this world.'

And the British-based American actor said he was determined to hold himself together, for the sake of Henry's grieving siblings.

'I am astonished by the love-in-action displayed by Henry's mom and his brothers. They are why I will endeavor to not go mad with grief.

'I don't want to miss out on their beautiful lives. I'm greedy for more experiences with them.

'The NHS nurses and doctors and the home carers and charity workers who helped our family survive Henry's illness will be my heroes until the day I die.

'I am desperately sad right now, but I can say with authority that there is good in this world.'

And he ended his tribute with a message to his adored son.

'Thank you, beautiful Henry, for spending as much time with us as you did. We miss you so much.'

Delaney has two other sons, aged six and five, and is married.

The Massachusetts-born comedian first came to prominence on Twitter, sharing his jokes on the platform.

After developing a huge following, he was signed up to shoot a pilot for Comedy Central.

The show was not picked up, however Delaney went on to co-write and co-star in Catastrophe with Sharon Horgan, taking inspiration for the show from their own lives.