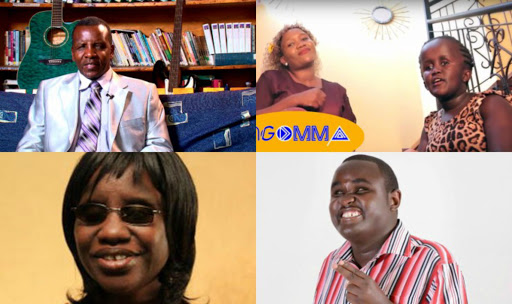 They say disability is not inability and we have quite a number of Kenyan artists who live by this phrase.

They have never allowed disability to deter them from doing there best.

These artists sing some of the best and most listened to songs. Unlike some of the new crop of gospel artistes, these singers living with disabilities have produced great hits that carry strong messages which many can relate to.

Although most of their songs do not dominate local airwaves due to lack of marketing, these artists are a force to reckon.

From Mary Atieno to Denno, meet the Kenyan gospel singers living with disabilities.

The veteran singer, who is blind, has weathered the gospel scene for over three decades. The mother, pastor and a CRE teacher at Buru Buru Girls' High school has more than 13 albums to date. She used to sing alongside her husband, pastor Alex Ominde.

Denno, who recently married his longtime girlfriend, has faced a lot of challenges in life and in another hit Stori Yangu featuring Bahati, he narrates his life story.

He was born with sight in both of his eyes just like any other child but lost his eyesight one day while having dinner.

"I remember one evening after mum blessed our dinner at home, I reached out for the plate and missed it. This shocked me and everyone who was present at the dinner table," he said in previous interviews.

The condition has never deterred the award-winning singer from doing his best. His inspiring songs speak volumes. He recently released a new song titled Huniachi featuring Gloria Muliro. The song is very emotional and you will definitely cry while listening to it.

Ignatius Ogeto famously known as DJ Euphorique was born with the ability to walk but as at one stage in his life he developed some complications that left him wheelchair bound.

Confined to a wheelchair, he's not afraid to do what he loves most.  He's one of the best gospel DJs locally.

Angel was born with a birth defect called congenital hydrocephalus (the buildup of excess cerebrospinal fluid in the brain at birth) but that hasn't deterred her from serving her Lord.

She is a talented singer and her new song Nataka Jua narrates her life journey.

Has sight on one eye. Daddy Owen is the founder of Malaika Tribute Awards which is aimed at celebrating people with disabilities and recognizing the work of people who have contributed to making their lives better.

His story is so inspiring. The award-winning singer is among the few artists, who are still relevant in the flooded industry.