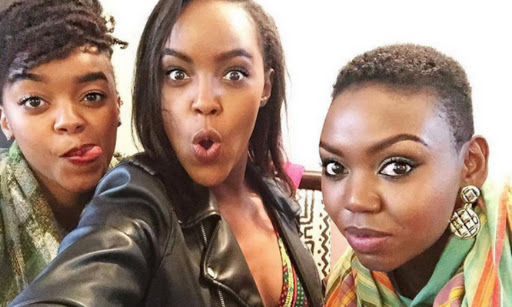 There's a lot of tea being served out there. Word has is that Sharon Mundia and Lonina Leteipan's marriage is no more. The two power couple parted ways a few months ago and rumours have been going round that infidelity was the main cause of their dead marriage.

And indeed confirmed that they were no longer together.

"IT TOOK ME THE WHOLE DAY TO WORK UP THE COURAGE TO POST THIS BUT YOU KNOW WHAT? I HAD A BABY 5 MONTHS AGO AND FOR THE FIRST TIME IN AGES, I’M TAKING CARE OF MY BODY & MIND AND EATING RIGHT. AND I FEEL GOOD ABOUT WHERE I’M AT. 💪🏾 SO, HERE’S A PICTURE OF ME IN MY PRETTY EPIC BATHROOM  ABOUT TO HIT THE POOL. 🏊🏾‍♀️" she wrote on Instagram.

"THE PAST FEW DAYS HAVE BEEN SOME OF THE MOST CHILLED, RELAXING DAYS I’VE HAD IN MONTHS. I’VE TAKEN AFTERNOON NAPS ON BEACH BEDS WITH MY DAUGHTER, EATEN TO MY FILL (AND BEYOND), SLEPT IN, TAKEN AFTERNOON DIPS IN THE POOL AND JUST ALL ROUND ENJOYED LIFE."

This left their followers especially the young couple who looked up to them heartbroken. The last nail in the coffin was when she said;

"A LOT OF UNGRACIOUS AND UNTRUTHFUL STORIES HAVE BEEN CIRCULATING ABOUT ME RECENTLY. EVEN THOUGH THEY HAVE CROSSED THE LINE, I CHOOSE, AS USUAL, TO FOCUS ON MY VISION OF CREATING AND SHARING ONLINE CONTENT THAT WILL UPLIFT AND SPREAD POSITIVE ENERGY ALL AROUND ME. RIGHT NOW I’M CHOOSING TO FOCUS ON MY WORK AND BEING THE BEST MOTHER I CAN BE TO MY SWEET LOVE, NAILA." read a post by Sharon Mundia.

"I am not even bothered by the story, I read it and I was like wow! If someone is trying to make up stories to bring someone down at least make it credible.

The story is not true, some of the things that were talked about like trying out lesbianism to be cool, who will want to do that in a country that is homophobic? At first, we laughed until we realised there are people who actually believe it," Kihoro said.

She went ahead to reveal that Sharon Mundia, Fena and herself are hardworking women and it's only idlers who would spread and believe such stories.

"I got messages from people asking if it is true. I don’t know what the intentions of the person who wrote that story were. I don’t know if they were bored or they just wanted clicks on their blogs or maybe they have something against people who are doing well.

We are hard working ladies and doing our best, we are not going to focus on negativity."