'Stick To Photography If You Do Not Have The Balls For Criticism!' Fan Tells Boniface Mwangi After This Message To His Critics 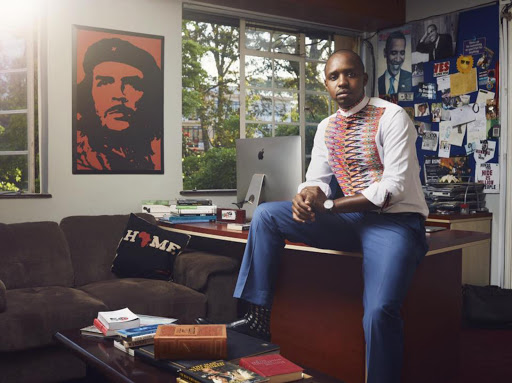 Human rights activist and award-winning Boniface Mwangi is breathing fire. Mwangi, who unsuccessfully vied for the Starehe constituency parliamentary seat has come out to respond to his critics.

According to Mwangi,  no one is perfect and even public figures have a life to live and people should stop poking their noses in things that don't concern them. Here is what he wrote;

"A few years ago I was having very public drama in my life. I had a chat with the ever-feisty, Caroline Mutoko about what I was going through and she shared how she deals with foolish criticism, "If you don't fund, feed or f**k me, I don't give a f**k!" Those three F's are highly recommended to those of us who have allowed strangers silly comments to dictate our moods. Do you! Just because we have a very public life doesn't make us superhuman! We have feelings, we fart, make mistakes and that's life!"

Mwangi's sentiments elicited mixed reaction and here is what some of his followers had to say;

Michael Ndube: That's great Boniface, you should borrow a leaf from Raila Odinga, the guy has immunity for such kind of nonsense, smiles and tells them hio ni ka mnyambo ya punda, and life moves on, I've never seen him complain..he's called the enigma..

Ben Obiero: If you don't feed, fund or f**k me... some words are unwise to put in writing, shows your real attitude...You should stick to photography if you do not have the balls for criticism as you pursue a public service role. True leadership is not measured on how many stones one threw, or how loud one shouted along court corridors, or the number of demonstrations one led, true leadership is measured on the size of fight one puts for what is important for all those who need it most, whether politically, socially and or religiously. At this point when laws are being cannibalised, university students are being abused, at this point when this country is at the edge of the precipice, you are audacious enough to master the only words that summarize the word f**k in two sentences? And the irony is that the intensity is not propelled towards the horrid activities that are currently happening, the purpose is selfish angradizement..Very disappointing.

Rogers Matumbai: The worst mistake you ever made is when you tried to be what you have always been fighting against. Now look what it has made you.... a big boy crying over feelings. Man up and get back to what you do best, fighting injustice against the Kenyan people.

George M. Maina: Wow! What a brilliant leader Starehe lost! The pain of losing...Thanks to your teacher for teaching you euphemism.

Sam Wa Ukweli: You haven't yet come to terms with your performance in the just ended elections. That's the consequences of an inflated ego.

Tommie Rabach: You are one sober person that sees this country from both sides of the coin, the political and the voters' sides. If called upon any day I would vote for you, again and again, keep the fight

Josephine W. Kinuthia: You seem to have a soft skin. Strange for a man who spent many days criticizing others. And when you put yourself out there you become fair game. Learn to cope.

Mburu Karimi: Man up and take that L bro. The irony trying to join the same regime you were against. I don't think many people give a shit about what we go through as Kenyans, those are just antics to only benefit y'all a**es.

Adhiambo Odak: You are definitely a fighter who loves his country! keep up the good work! We know that your agenda has always been about justice. One day it will prevail, stay strong.