'I Dont Want Costs Covered, I Want My Daughter,' Cries Natalie's Mother As She Shares The Only Letter She Wrote To Her 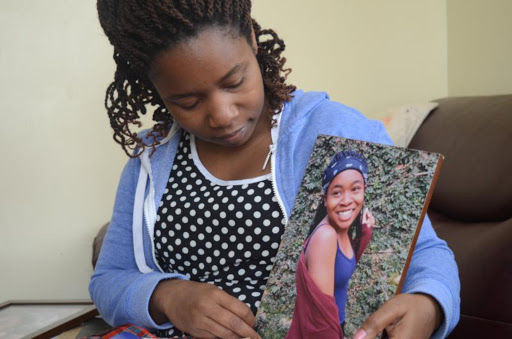 I hope you’re good. Live life and have fun. Yee, I’ve missed you, though I’ll be doing this every day until we come home…

Yess, Yess I’m reading… But Pesho ain’t coming back and I feel bad. But don’t worry about me, I’ll be fine. I’ll do happy things to forget it… Take care of yourself, okay. I’m trying my best here as hard as I can. If I don’t pass in entry, I’m sorry I’m just sad, but I promise I’ll make for it end-term…

I love you so much, mum. I’ll do everything to make you happy.

This is the first and last letter Natalie Nanga would write to her mother in a journal she had titled ‘Mum’s letters’. It was written on August 30, two days before the Moi Girls Nairobi School arson that killed Natalie and eight other girls.

The journal is one of the items Natalie’s mother, Clara Asiko, was given when she went to collect her daughter’s belongings from the school.

When we visited Clara at her home in Syokimau, Machakos county, on Saturday, she was preparing for a church service on the estate. She was unusually calm and struck the figure of a woman who had not quite come to terms with the loss of her only child.

Clara was a single mother.

IT WAS JUST ME AND NATALIE

"It was just me and her. Natalie loved to write. This letter is so sad. Pesho was Natalie’s very good friend. They did everything together, but she transferred and it really affected Natalie," Clara says as she looks at the journal pensively.

Pesho, a nickname for Patience, had bought Natalie the journal for her birthday, which was on August 12. Natalie was turning 15.

In her note, Patience said, "I was so excited about your birthday I bought this book in June. Nagubenda gama banda bassion [nakupenda kama Fanta passion — I love you like Fanta passion]."

Patience had been Natalie’s friend since their primary school days in Lukenya School. Clara says perhaps the culture shock of moving to a public boarding school from a private school was too much for Patience.

Natalie, too, had wanted to move to another school. "She said she didn’t like the school and didn’t give any specific reason, but I think it was the change to a public school. I thought she would get used to it with time, but she kept saying she didn’t like it, to the point I was considering moving her."

Clara has not had much time to process Natalie’s death. The previous day, she was digging through her photo albums to look for good shots of Natalie to use for the service that will be held tomorrow before the burial on Friday.

Hawa Aziz was the first of the nine girls to be buried on Saturday at her parents’ home in Homa Bay county.

As Clara goes through Natalie’s photos, she says she finally found someone able to unlock the pattern on her daughter’s phone to retrieve more good pictures.

She also says it is painful to see how fast some parents whose children survived have moved and have shifted to calling for funds to build another dormitory, without seeming to care that she and the parents of eight other girls are still grieving.

In the middle of the interview, Nairobi Governor Mike Sonko’s office called and asked for details of when Clara needs a hearse to transport Natalie’s body for burial in Kakamega county.

“Let’s see if they follow up. There is a lot of protocol when following up on the money pledged by the government,” Clara said.

He said the government will give each family Sh100,000 for burial. Sonko pledged hearses to transport the bodies.

As visitors stream in to prepare for the service, it is evident Clara’s calm is perplexing to many.

One woman could not hide her bewilderment as she saw Clara calmly walk up and down, welcoming and engaging visitors.

Perhaps it is her faith that keeps her going, the Philipians 4:7 “peace that surpasses all understanding” that is at work.

The visitors reminisce about Natalie. She was a focused girl. When she scored 390 marks out of 500 in her KCPE exam last year, she was inconsolable.

“She had expected nothing less than 415 marks, but she was among the first batch of students to sit an exam under the [Education CS Fred] Matiang’i strict exam rules. Natalie wanted to be a paediatric surgeon,” Clara said.

The room lights up as Clara narrates how Natalie saved up to buy ngomas [rubber shoes].

"She set a target to save up enough money to buy ngomas [rubber shoes] and a big chocolate and when it came time to buy them, I saw her pick the small chocolate and asked her why. She said she was Sh15 short on her savings. I told her she should have just asked me to top up. But that was who she was, an independent girl," Clara said.

Clara said parents should listen to their children when they complain about issues.

She said other students need to be counseled because the tragedy has left them scared and scarred.

"One girl told me she cannot sleep. She tosses and turns and at 2am, she is still awake. She says she wants to be awake in case a fire starts so she is alert and can escape. Children need to be counselled because for most of them, death is remote. It is that thing that happens to their grandparents."

Clara said Amou Malong, who survived the fire but lost her sister Alakiir, has been grieving two people — her sister and Natalie, who was her friend, too. She said Alakiir and Natalie might have perished trying to rescue each other. Alakiir will be buried in South Sudan.

Right now, all Clara wants is answers and that those behind the arson be brought to book.

The Ministry of Education in 2008 launched the Safety Standards Manual for Schools.

The safety manual outlines guidelines on drug and substance abuse, disaster and emergency preparedness, school and community relations, infrastructure and how to create a conducive teaching and learning environment.

According to the guidelines, every school should post a blueprint map of the buildings, classrooms, dormitories and hallways.

There should be a telephone tree list including names of employees, teachers and parents for contacts in case of an emergency.

The safety measures include installation of serviceable fire-extinguishing machines, good security arrangements with provision for both night and day, well-maintained and clean learning rooms, a properly reinforced fence with an appropriate mechanism for repair and maintenance.

The dormitories should also have emergency exits at the middle and back, and windows and must be without grills and should be easy to open outwards.

Fire extinguishers and fire alarms should also be fitted in the dormitories.

The space between the beds should be at least 1.2 metres while the corridor or pathway space should not be less than 2 metres.

Since sharing of beds is prohibited in schools, admissions should be tied to bed capacity at all times.

All doorways should be wide enough, at least 5 feet wide, and they should open outwards. They must not at any time be locked from outside when learners are inside.

Each dormitory should have a door at each end and an additional emergency exit at the middle. It should be clearly labelled “Emergency Exit”.

Dormitory windows must be without grills and should be easy to open outwards.

Fire extinguishing equipment should be functioning and placed at each exit with fire alarms fitted at easily accessible points.

Regular spot checks by the teachers and the administration should be undertaken before learners retire to bed.

An accurate roll call should be taken every day and records well maintained.

There should be inspection of hygiene standards of the dormitories and the learners on alternate days of the week.

Bunkbeds should be strong and firm and fitted with side-grills to protect learners against falling off.

Carter Otieno, a close relative to Natalie Nanga Asiko also shared a heartbreaking message describing the late as a good girl who had an impact in the lives of many.

"It breaks my heart even to admit that you're gone, it's like someone just reaped off my beating heart. I remember your first steps, your first words, you were only too young but impacted the hearts of many.....you're too dear to me and everyone you came across. Always smiling....you touched my heart in a special way Natalie Asiko Otieno I thank God for every precious moment he allowed me to have with you, it was always great. You made every moment special just by being there. I thank God for your beautiful soul.I cannot say goodbye, but rest in the Lord's embrace. Clara Otieno may God give you peace and comfort."