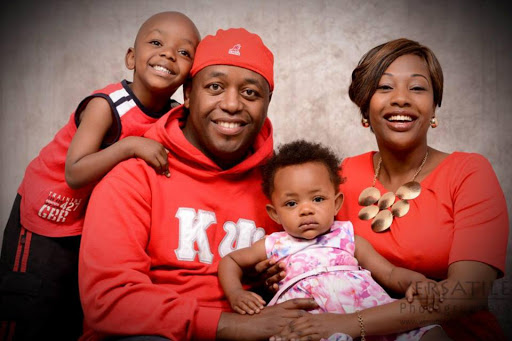 It's exactly three months since The Property Show host presenter Janet Kanini Ikua succumbed to lung cancer. The jovial media personality who touched the hearts of many especially cancer survivors and warriors.

Well, Janet left behind a husband George Ikua and two kids; Pedro and Jasmin whose life has changed after her demise.

They miss her dearly.

In a recent interview with the Nairobian, George revealed that indeed Janet Kanini left a huge vacuum.

"Grieving is a very personal process. It’s like a movie you watched and now you remember every fine detail. I shared 14 years with Janet. Her absence has left a huge vacuum.

My four-year-old daugther Jasmine is still trying to understand her mothers loss.

It is difficult to tell her why her mother cannot come home for just 10 minutes, say hi, and go back to heaven. It is always difficult to respond to this question. My son on the other hand knows what happened and it is very painful for him," he told the Nairobian.

Ikua who is a loving father to his children, is working to help cancer patients in the country through Kanini 4 Africa Foundation and he recently received an award during the fourth International Scientific Conference.

Janet Kanini was recognized by Tom Arocho Award who feted her with an award for Commitment to Excellence in Coverage of Lung Health Issues.

"We started the Kanini 4 Africa Foundation, and I have been doing exactly what I promised: Talking about cancer, aiding in its diagnosis and treatment through partnerships.

The foundation also seeks to support the training of oncologists and currently we have the ongoing Kanini 100 programme that will be supporting 100 cancer patients annually. In November, we are planning to have the Janet Stands With You event," said George.

When asked about his most memorable moments with Kanini, Ikua gave a tear-jerking answer.

"That particular Thursday when doctors from India asked for Sh1.2 million by Monday the following week! We had not raised even a shilling and it was a tough moment.

Luckily, a radio show assisted and Kenyans raised the cash. It was also very emotional to watch my sick wife presenting The Property Show despite her condition.

I keep wondering how people survive. Her medication was very expensive. How did we even manage to raise that kind of money in two years! It was a miracle," he said.