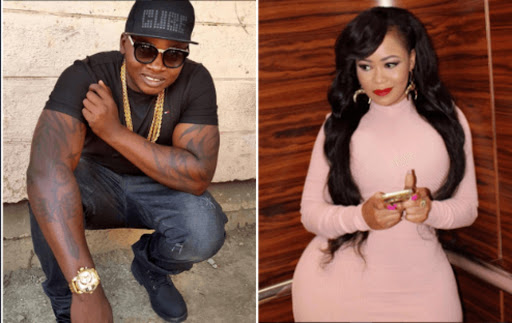 Rapper Khaligraph clapped back at socialite Vera Sidika, in the most savage way possible.

"MY DIA HUJATOA TINT BADO! TINT YAKO BADO IMEACHA MA TRACES NYUMA COZ ULITOA MANUALLY BADALA YA AUTOMATICALLY WHAT KIND OF MAN BLEACHES??? BLEACHING AND SKIN LIGHTENING IS FOR WOMEN. NOT MEN. CAUSE IT’S LIKE MAKE UP. MEN DON’T APPLY MAKE UP. OH PLUS WE AIN’T SAME BRO! SKIN LIGHTENING AND BLEACHING ARE TOTALLY DIFFERENT THINGS…STAY ON YOUR LANE PRISSSS!”

And Khali clapped back. Read his response hapo chini.

Now, the son of Princess Jully has decided to advise Khaligraph.

Makajully told Khali that he should not beef with a woman.

"My opinion og when a woman be beefing she think you should halla not diss. luopeans dont hit them when they wrong we xx them good so they know you still boss," Makajully said.

Here are what other other fans think about the Vera-Khaligraph beef.

K-lynn Namai: A person who uses other people's insecurities or digs up their buried skeletons so as to attack them, is just savage. We all know Vee n all that she did to her damn self. She never kept it a secret... Tell us something new Omollo!!!!! Continue dealing with Wanaume wenzako kama Octo.. Achana na madame. Period.

Simi Xeveria: Khali is a total fake and even uses future's jam mask off to diss da folks who tryna put his fake bols in his pants now hes dissin a female? he aint got no lane afta all.