Please Pray For Zari's Ex-Husband! Latest Online Photos Of A Bedridden Ivan Turns The Strongest Fan Into A Bundle Of Tears 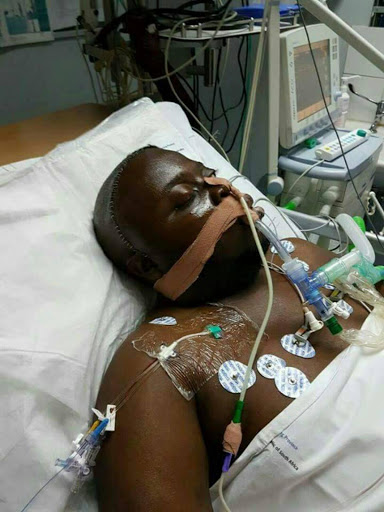 A viral photo has emerge online of Zari Hassan ex-husband Ivan ‘Don’ Ssemwanga after his surgery.

It is not clear who leaked it.

It was earlier reported that he had fallen sick after suffering a heart attack a while back.

The May 14th incident saw Ivan get admitted to Steve Biko Hospital Pretoria in South Africa where he is currently undergoing treatment.

During his hospital stay, Zari who is currently married to Tanzanian megastar Diamond Platnumz has taken over the running of her ex-husband's home and the guardianship of taking care of their sons together.

According to some family members, Ivan’s condition is not yet stable and his ex-wife Zari Hassan, the mother of his three sons has urged her fans to pray for him.

The photo of Ivan bedridden in hospital has made rounds online. It has shocked many of his supporters.

Many have been moved to a point where they are praying day and night for the quick recovery of the business tycoon.

The photo was taken after his surgery in Pretoria, South Africa.

NSFW! THE PHOTO YOU ARE ABOUT TO SEE ARE NSFW. MPASHO WILL NOT BE HELD RESPONSIBLE FOR ANY OFFENCE TAKEN FROM THE VIEWING OF THE PHOTO.

Zari wrote, "God will see us through. Get well soon ivan don…” she shared on social media after fans flooded her social media pages with comforting messages.

Hadijjah Nakalema: We are praying for him,last saw you guys together one time at Garden city on Xmas, anyways……….

Rumanah Mohamed: You have a big heart, God will see him through, Amin.

Curtis Cleveland: He will be fine by God’s grace.