Hapa Kuna Mtu Ataumia! Former Mother-in-law Actress Celina Reveals What She Is Planning To Do In Bed With Husband 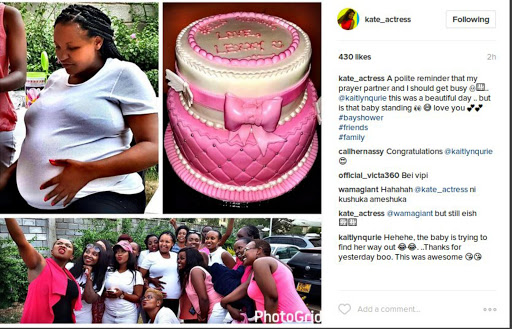 It's 2017 and many celebrities are already making big plans.

Some have thrown in the towel and resolved to walk down the aisle while some are resolving to improve on their garbage music (musicians, I'm talking about you) and others on how to settle down and have children.

Celebrated local actress Katherine Kamau popularly known as Celina is one of them.

Kunyamba Ni Shida! See The Struggle Celina Of Mother-In-Law Goes Through In Her Relationship

The Harpic brand ambassador who is engaged to Phil Karanja - former Tahidi High actor and now a top producer has caused a stir online after gushing about having baby number two.

Celina revealed that she and her 'prayer partner' (thanks to Bahati for inventing the term); will have to create time despite their busy schedules and do something to remedy that need.

Well, Celina seems to be ready for another baby and she revealed this after attending her friend's baby shower yesterday.

"A polite reminder that my prayer partner and I should get busy," she posted.

Check out the screenshot