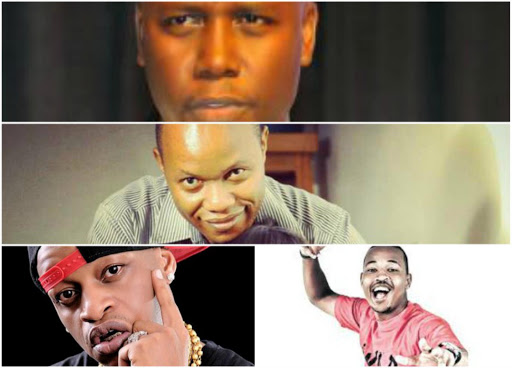 Right off the top of my head, I can count very many weak men. Loud, belligerent douchebags who attempt to bed every wench they come across. I should know, this was a billing I fit to a "T" not too long ago.

And alot of Kenyan celebrities are weak men passing themselves off as real men. It isn't too hard, Kenyan society allows weaklings to masquerade as real men if they drive a car, have abit of pocket change and run through women like our government does corruption scandals.

The recent Eunice Njeri tale told to all via Facebook

So I decided to have a look at just who among the many Kenyan celebs have been dumped and handled it like a man. Here is my list:

When he found out his wife was cheating on him, he didn't run to social media. Infact, he opted to silently deal with his situation till Mpasho blew the lid right off.

He was a little child about his break up, running around trying to gain sympathy from the world of social media.

He is a real man. He didn't start crying like some love-struck heifer. he kept it cool and collected. You cannot help but root for the man.

This guy I guess just reacts like I'd expect -like little child. I was entirely unimpressed with the fact that his African woman showed more composure than him. He keeps insulting her and addressing their issues on Twitter but he does. Bleurgh!

Mscheew! This man even revealed his loboko on live TV simply because he was upset at the fact that his lass was through with him!

He handled his mess like a real man. I met the man and what I can say is that I have truly learnt alot from him. He is calm and at peace. He uses his relationship with his God to help steady and he is letting time deal with his pain.

The chairman of the little boys club. I believe Maina Kageni called his ilk the "Jameson Boys". This dingbat decided not only to air his dirty linen in public but also went as far as to flaunt his flings to his estranged wife in the name of posting Instagram photos.

I actually had to catch myself when I saw him give me life advice and call me out -homie actually has no right to advise anyone. Get your life right fam. Do not be those lads that become so poor that all they have to show for their lives is money!