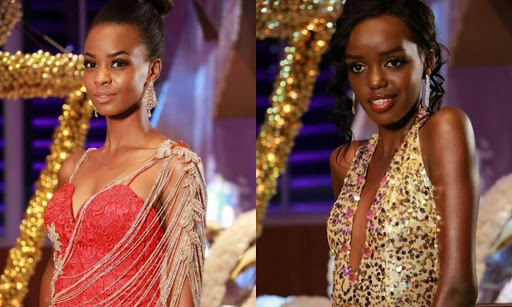 Well, just after the joyous victory of Miss Kenya who topped the charts this year by being among the top 5 finalists, Miss Tanzania has come out to tarnish her name unveiling the drama the two of them went during the peagent.

First of all, Tanzania’s Diana Edward is accusing Kenya’s Evelyn Njambi of ‘stealing’ her theme. In an interview with a Tanzanian based TV, Diana said that she believed she would have won the Beauty With Purpose award but the two beauty queens had the same theme of Female Genital Mutilation (FGM). Diana complains that Evelyn went on to report her to the event managers that the two had the same documentary themes which in her view hindered her from winning the award.

Miss Tanzania is accusing Miss Kenya of lying about a Kenyan designer who gave her a gown that Miss Kenya had already worn in a previous photo shoot. Diana who did the catwalk for top model in Africa says there was hidden agendas during the competition that deterred her from winning.

Well, Miss Tanzania seems to be jealously hurt by Miss Kenya’s victory which gave her the Miss Africa tittle after this year’s first Miss Kenya was stripped off her tittle. Diana went on to say that Evelyn told fellow contestants that she (Miss Tanzania) shot her documentary in Kenya. Daina says that fellow African contestants from Ghana, South Africa, Uganda, South Sudan and Congo are among those that can back her allegations against the Kenyan queen.

Just after the competitions, Miss Tanzania took to social media to compain about the win. Well, it seems she is building up a beef that she doesn’t seem to finish. In the meantime lets congratulate our Kenyan beauty queen for her amazing win. We are currently trying to reach Miss Kenya for comments to the allegationd put to her.