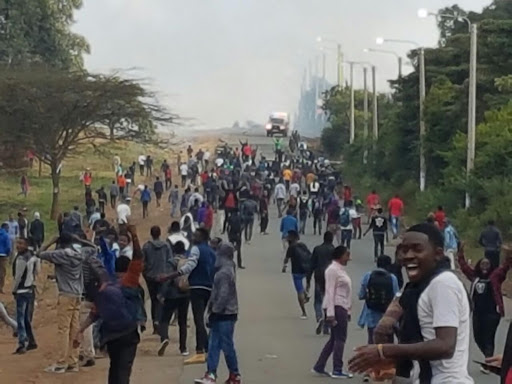 As we speak, students from Multimedia University of Kenya (MMU) have paralyzed transport along Magadi Road and are engaging police in running battles.

The protests were ignited by deaths of two of their colleagues who were killed right outside the institution's gate.

Cynthia Akoth - a first year student at the university - passed away on Sunday after being ran over by a matatu while another by the name Karen Chepkemoi sustained injuries.

Preliminary investigations into the Sunday incident showed the driver was drunk and was driving on high speed before the bus overturned.

09:03 Multi Media University students are on a rampage following the ~more ⇢ via

And now we have chaos from multi media university

Comrades are mourning dur to reckless driving by rongai matatus.