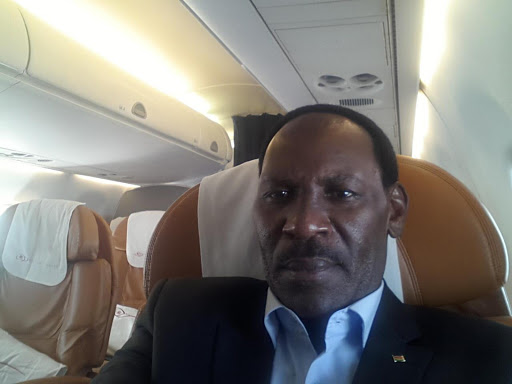 All is not lost. We still hope that our prodigal daughter Esther Arunga will come back one day and continue where she left off. She used to brighten our faces whenever she graced the screen. But in 2010, things began to deteriorate when Esther Arunga quickly called off her engagement to Wilson Malaba and eloped with Quincy Timberlake, a man she met at the famous Finger of God church through the founder - Joseph Hellon.

The former TV siren then went missing for close to two years and later in June 2014, the 'power couple' made headlines once again after news broke that Quincy had murdered his firstborn son, Sinclair Timberlake, in their Australia home and he was jailed at a local prison.

That aside, Esther Arunga's sister Abigail has penned an open letter to the CEO of Kenya Film Classification Board, savagely attacking him after he said that atheists have no place in the country. Mutua is known for his harsh remarks on whatever evolves around the media industry. Below is the letter:

According to you, atheists have no place in this country.

That notion is absurd. Someone must have told you that you are a) a legal authority on religion in Kenya, and b) that you are God. That is the only reason why such a remark would pass from your lips. It must be the only explanation.

You continue to ignorantly cite a preamble in our Constitution as grounds for your absurd claims, saying that the Constitution recognizes the supremacy and sovereignty of a higher power, while ignoring what the constitution actually says about religion.

An introduction does not a law make.

Your ranting and raving against the event that was supposed to happen on September 24, entitled ‘Raising Children Without God’, is therefore completely unwarranted and unprecedented.

Their children. Not yours, Mr Mutua. You, of course, are completely within your rights to pass on what you believe to your children, and you should allow others to do the same.

And what, pray tell, has the Chairman of the Kenya Film Classification Board have to do with parenting, aside from the laws that define your organisation's role ? You are well outside your mandate.

It is more absurd to me, daily, that you are encouraged to overstep your job description in such a frivolous and unbecoming manner, from billboards to thinking you have the power to regulate the internet, much like our neighbourhood dictators who block Twitter during elections.

And now on to why you must think you are God. The actual God who you seemingly believe in but pay no attention to, created humans and gave human beings free will.

Free will, Mr Mutua, in case you are not aware, includes the freedom to choose what you believe in – whether it is God, or not.

Revolutionary, isn’t it? And you are trying so very hard to take that away.

What’s more, freedom of belief (and association!) is allowed for in the Constitution, which is why we have so many diverse practices that thrive in our country – to meet who we want, associate with who we want, form organisations, take the power of active citizenry into our own hands.

You are not a god, and you have no right to monitor and police what people believe in. Quite frankly, your moral policing escapades are laughable at best.

Listen, Mr Mutua, if I want to give my children to the so-called devil, then so be it. It is my business.

But the greater devil that you have to deal with is a glaring lack of understanding about what your job is. Go and pull out the log in your eye before trying to get at the speck in mine."