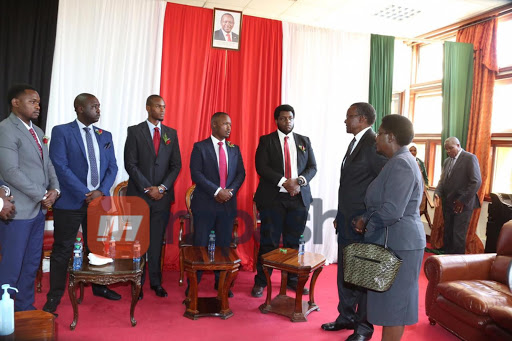 It is rare to find all of president Moi's grandsons in the same place at the same time. This time they are in mourning.

The grandsons are children of Moi's eight children with his late wife Lena Moi.

Moi had five sons and three daughters. The firstborn is Jenniffer Chemutai Kositany who is followed by the late rally driver Jonathan Toroitich.

The third born is John Mark, is the least known of Moi's sons. The fourth child is current Rongai MP, Raymond Moi born in 1960 who is followed by twins Philip and Doris born in 1962.

Philip is a retired army major and among the pioneer indigenous Kenyans to take up polo as a sport.

Doris, on the other hand, has kept away from the limelight. She sits on the board of some of the schools associated with the former president.

June, the youngest, is Moi's adopted daughter. Like Gideon, she was also the former president's favourite.

Meet Moi's scions among them are Gideon's sons Kimoi and Kigen, the photo was taken by the effable Ezekiel Aminga.

Moi’s father, Kimoi arap Chebii, died in 1928 when the former president was only four and little is known about his mother, Kabon.