'Usinidharau Because You Have More,' Vera Sidika Confronts Her Ex Boyfriend About Her Small Mansion 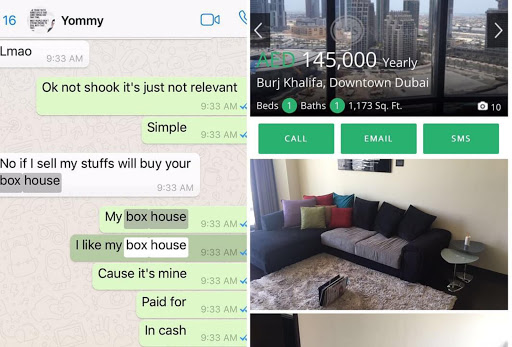 Socialite and business woman Vera Sidika has been the talk of the town after opening up on social media about her abusive tycoon ex-boyfriend.

Earlier on Vera seemed to be living a charmed life. To the outside world she was the most happy woman in the world with all the flashy vacations she had with him in Dubai.

The couple was the envy of many until recently when it was rumored she got dumped for a South African beauty.

Vera has shocked many with her revelations on social media one of them being insults from her ex regarding her house in Nairobi . She boldly posted where her ex stays and warned him about his  harsh words towards her property.

This is what Vera said;

''When The entire world dreams of setting foot at burj khalifa, he lives there. It's not easy. If u think it is; Try pay 35,000 dollars yearly anywhere lets see how u cop. But again what got me pissed is as much as u live in BK. Don't look down on people. Abusing me & Calling my house a box house and all that wasn't necessary at all. That if he sell his designer clothes he will buy my box house ?? I may not own a proper huge mansion but at the end of the day it's still mine. My sweat. No one has the right to put others down just coz they feel better than them. At all ? on top of it get violent. Alcohol problem etc. too much!''

Some of her fans had interesting opinions about her case have a look at them;

mecy_gray: How abt stop answering him??block him n move on ...u giving him too much power!!just stop for once talking to him!!!

mrolawa_le: When you go for the glitters, u get a cheater, beater and a psycho ....am sure you saw this coming ,you were blinded by the 30 billion in his account ...deal with it

deesilvr: Apologising on behalf of all my Kenyan ladies ???,Kenyan men take us back ??,human is to error

marywachira: This man is syco, be very carefull

misskaraymi@doreenwanjiru: woi. i have known a few people who have been fucked over by naijas. my blood boils nikipatana tu nao, they're something else honestly