R&B singer R Kelly has walked out of a Chicago jail after a $161,000 child support payment was made on his behalf.

Cook County sheriff’s spokeswoman Sophia Ansari said Kelly was released Saturday after someone paid the back child support for him. She did not know who made the payment.

It came three days after a judge ordered Kelly jailed until he paid the total amount he owed by that date.

Long arm of the law! R Kelly charged with sexual abuse in Chicago 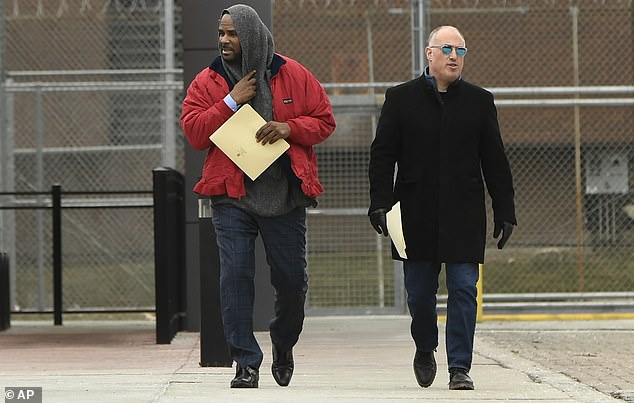 ‘I promise you we are going to straighten all of this out, that’s all I can say right now. I promise you,’ the embattled singer told reporters as he left the Cook County jail. He also stated that he loved his fans.

Fans could be heard screaming for R Kelly as he left, with one woman even asking him to touch her hand and others shouting that he is still the ‘King of R&B’.

The singer was taken into custody during a hearing over the child support on Wednesday. His next hearing is scheduled for next Wednesday.

His publicist Darryll Johnson said the singer came to the hearing prepared to pay $50,000 to $60,000, but the judge wanted the whole amount.

He said Kelly did not have the whole amount because he has not been able to work.

On Wednesday, Kelly gave an astonishing interview to CBS where he protested his innocence, cried and wept.

He even appeared to be physically restrained during the animated outburst, in which he vehemently denied all allegations against him.

In the TV interview aired on Thursday, Kelly asked:

How can I pay child support if my ex-wife is destroying my name and I can’t work?

Kelly also told CBS that people had stolen money from his bank accounts. He offered no further details.

Kelly was indicted on February 22 in a Chicago courtroom on 10 counts of aggravated criminal sexual abuse against four victims, three of whom were underage at the time the alleged crimes were committed.

If convicted, he could face a maximum prison sentence of 70 years – 7 years for each count.

Kelly spent a weekend in jail after his arrest last month and wasn’t freed until a 47-year-old suburban Chicago business owner – Valencia Love – posted his $100,000 bail.